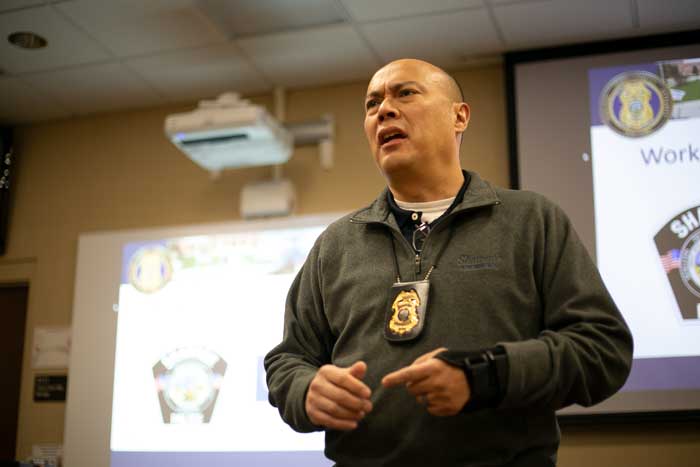 Sgt. Craig Herrmann retired from the Shawnee Police Department on June 17. Above, a file photo of Herrmann leading a training session for residents on violent, critical incidents.

The city of Shawnee earlier this month announced that police Sgt. Craig Herrmann retired after 27 years of service to the Shawnee Police Department.

“The men and women of the Shawnee Kansas Police Department wish to congratulate Sgt. Craig Herrmann, Badge #873, on his retirement after 27 years of dedicated and honorable service to the Shawnee Police Department, the citizens of Shawnee and the surrounding communities,” said a dispatcher on June 17, Herrmann’s last day of service. “Congratulations, Craig, and thank you for your service.”

Sgt. Craig Herrmann retired today after 27 years of faithful & dedicated service to the Shawnee Police Department, the City of Shawnee and its citizens! Thank You for your service & enjoy your retirement! pic.twitter.com/aEwzjgo7BO

The Lamar Avenue resurfacing and rehabilitation project is complete, aside from the separately funded bike lanes and permanent striping which will begin soon.

The project began on May 6 and was completed more than a month ahead of schedule, and included the following renovations from Foxridge Drive to Shawnee Mission Parkway:

The city of Merriam will not hold a Party in Your Park event at Campbell Park on July 17 as COVID-19 cases continue to rise in Johnson County.

The July 17 party is part of an event series and was previously limited as a result of the pandemic. Merriam planned to have live music, but not food, drinks or kid’s entertainment as usually featured by the series event.