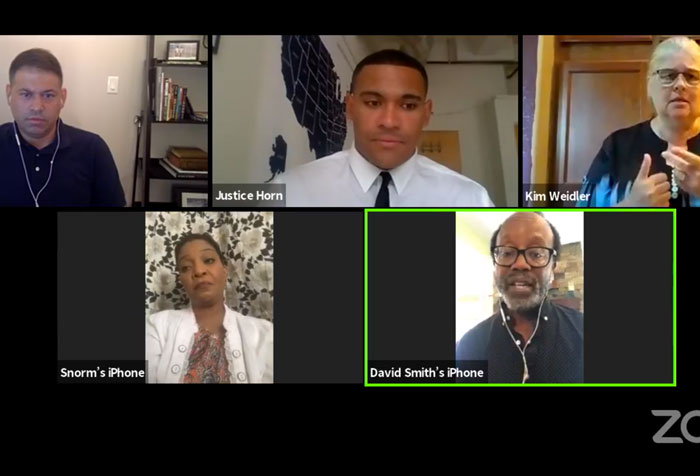 As the MainStream Coalition enters the third week of its Continuing the Conversation series, guests tuned into Facebook live to discuss racial equity and education Tuesday afternoon.

Three guests — Sheila Davis-Norman, a mother, Justice Horn, a social justice activist, and David Smith, chief communications officer for the Shawnee Mission School District — weighed in on a number of racial equity issues in education including representation and curriculum. Smith said, in response to a question about the effects of systemic racism in education, the bottom line is kids of color aren’t doing as well.

“Our students of color, generally across the country, students of color aren’t doing as well as their white counterparts,” Smith said. “As an educator, I take that as being on us. You begin to ask the questions of what are we doing that privileges certain groups of kids and disadvantages others.”

Davis-Norman mentioned the lack of teachers of color and how students of color might be more receptive to educators who look like them. Smith said he agreed with Davis-Norman, but the challenge lies in recruitment, specifically the lack of diversity within the area’s candidate pool.

One way to increase teachers of color is the “grow your own” method, in which a district works to get students of color interested in teaching for the district in middle and high schools. While districts must work to diversify its teaching staff, they must also work to ensure the current staff can support all students no matter their background, Smith said.

The lack of representation and inherent systemic racism, however, doesn’t stop after high school graduation. Horn said the issues from K-12 schools are magnified in higher education: Financial barriers further burden students of color who don’t see themselves represented in class and may be first-generation college students, he said.

Lack of representation bleeds into curriculum as well: Smith said students of color don’t fit the mold textbooks are marketed toward, which does them a disservice. Horn, Davis-Norman and Executive Director Michael Poppa said history books specifically need to be more inclusive and teach students about more than a select few figures like Harriet Tubman and Rosa Parks.

“It’s time to rewrite our history, it’s time, it’s time,” Davis-Norman said. “We need new history books, we need to be included, LGBTQ+ —we all need to be in there. This is a new generation of people, we are not with that madness anymore.”

Below is a video of the conversation as recorded by MainStream Coalition. Following the video is a timecode of topics throughout the discussion. The next edition of Continuing the Conversation will be announced by MainStream on Facebook, Poppa said.