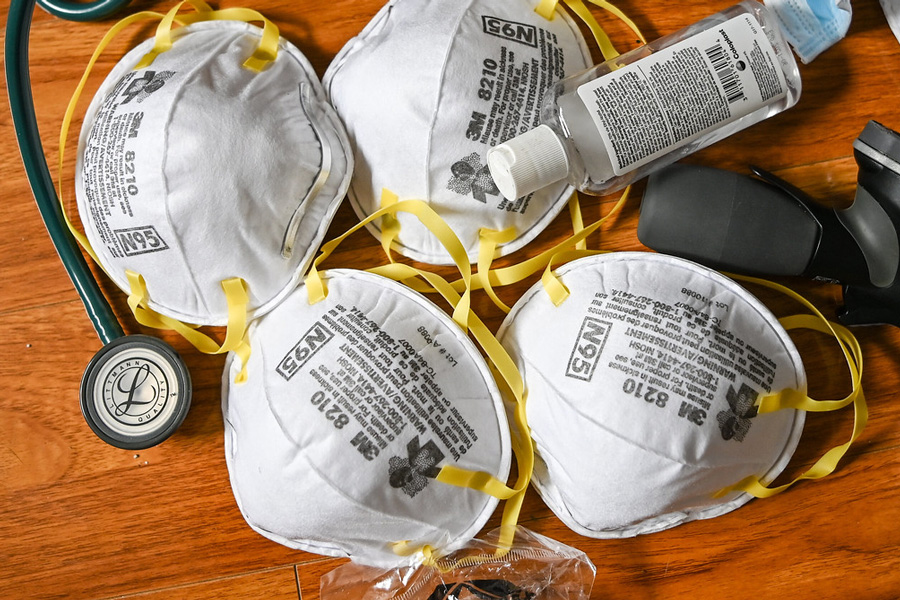 As COVID-19 cases spiked this week, the Johnson County Commission gave its blessing to an effort to stockpile a three-month reserve of personal protective gear.

The commission unanimously agreed to set aside up to $14.9 million of its $116 million in federal Coronavirus Aid, Relief and Economic Security (CARES) Act funds to build up its supply of masks, gowns, face shields and other protective gear. At the same meeting, Public Health Director Sanmi Areola, PhD, reported an increase in cases that he said cannot be attributed to a higher testing rate.

The county’s percentage of positive test results has been marching higher in past weeks, Areola said. This week, 6.4% of tests given came back positive, compared with 3.4% last week. Meanwhile the percent increase in new cases also is higher this week than it has been recently, according to the health department figures. This week showed a 24% increase in new cases over last week, while previous weekly increases were around 13% or 14%.

The move to stockpile personal protective equipment comes as many other areas of the country, including Arizona, Texas and Florida are seeing COVID-19 surges, and it included other provisions to hurry up the procurement process from legitimate vendors. Commissioner Mike Brown warned that the clock will be ticking on getting supplies.

“Demand is going to go sky-high in not very long,” he said, as competing entities drive up the price and shortages occur. “The sooner we can get out there and get to it, the better.”

While long-term care facilities have seen many cases, Areola said the seven-day moving averages show much of the increase now is outside of those facilities. He urged county residents to wear face masks and practice other measures to keep the spread in the younger population from finding its way to the more aged, where the effects of the disease are more deadly.

The county’s Emergency Operations Center distributes protective equipment to its community partners, but has had trouble because vendors don’t always have access to the promised equipment, Robeson said. Since the strategic national stockpile has become depleted, the county has had to rely on private vendors.

The emergency operations center, “is currently struggling to get past the point where organizations have more than just a few weeks’ worth of supplies on hand,” according to documentation on the need for a stockpile. “There have been times when PPE levels have become critically low or non-existent and some organizations have gone without the supplies they need.”

The new spending would enable the county to stabilize the supply by end of July and create a three-month reserve by the end of September, Robeson said.

About $250,000 of the spending would go toward storage of the supplies, and the county may need more for short-term staging because of the recent availability of more non-medical grade supplies, said Deputy County Manager Maury Thompson. The Kansas Department of Emergency Management has an additional 800 pallets of non-medical grade equipment that could be distributed to restaurants, schools and other public-facing services, but will need a staging area to hold them, he said. That should cost less than $100,000, Thompson said.

Robeson gave assurances to commissioners that although the supplies the county buys with CARES money will not be competitively bid, the staff would carefully vet suppliers. Competitive bidding can sometimes slow the process enough that the county loses out on supplies.

Meanwhile commissioners had questions about the new surge in cases. Commissioner Steve Klika asked for a clearer presentation of data on coronavirus cases and said questions have arisen as to whether pneumonia deaths are being attributed to the coronavirus because of the funding COVID-19 gets.

“Is this the new standard of life that we’re going to live in fear?” he said. Klika also said younger people need some hope of restarting their lives.

“The most vulnerable happen to be the aging in most cases and that’s where the attention needs to be. For the rest of the folks let’s find ways and hope of getting on with life,” he said.

Areola remarked earlier that the uncontrolled spread of the disease among younger people will increase the likelihood of older residents contracting it as the age groups interact. Influenza vaccine among the young also helps protect the older population because there is less chance for them to get it from younger people, he said.

“If we can get 80 to 90% of residents wearing masks I think we would be in a good position to fight the spread of this virus,” he said. “A buoyant economy is one that is healthy.”