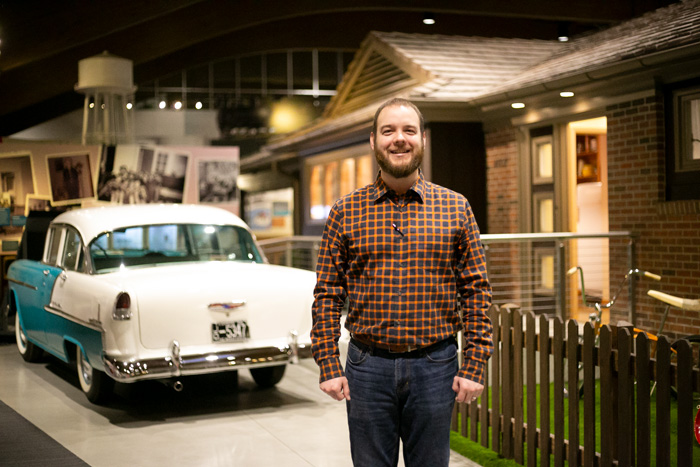 After finishing two history degrees, Andrew R. Gustafson wasn’t sure what to do for a career. He didn’t want to become a professor. But after he helped a living founder catalog his collection of 70,000 artifacts in Texas, eventually helping him create exhibits for a new museum, suddenly things clicked and he found his calling. His family wasn’t surprised; they often enjoyed watching him sort and catalog his toys spread across the living room. As curator of interpretation for the Johnson County Museum, Gustafson develops and designs plans for the temporary and digital exhibits, like the most recent one called “Rising to the Challenge: Suburban Strength in Difficult Times.”  He also leads special tours, manages the museum’s social media platforms and blogs, and plans adult programming.

Born and raised in upstate New York, he finished his bachelor’s degree in history at State University of New York at Geneseo, then earned his master’s degree at the University of Houston. His master’s area of study: English history in the 1600s. President of the Heritage League of Greater Kansas City, Gustafson enjoys keeping up with the news, traveling, hiking, classical music, and reading history, historical fiction and “really bad spy novels.” He lives in Kansas City, Missouri with his wife, Sandra Enríquez, a history professor at University of Missouri-Kansas City, and their cockapoo dog, Shaggy.

My grandparents would often be like, what are you going to do with a degree in history? Well, I was going to be a professor… now, I’m going to work in museums. That doesn’t always work out for people but it has, luckily, for me.

I’ve made a career of it, but I would also say it’s a lifestyle. I’m very passionate about history and learning history. In my free time, I read history. We go to museums, I go to historic sites because I like it. Partly, we go sometimes because I want to see how other museums do what they do (as) sort of inspiration. It’s a sign of respect for another institution, I think, to take something that they’ve created and shape it a little differently for your own institution.

What else would my life be if I wasn’t doing this? Sometimes I think I could be an FBI agent because history is an investigation. You’ve got to piece together sources and pictures and information to try to make as complete a picture as you can to help people understand what an event was like or what a person’s life was like or what was happening or what life would have been like, what it would have smelled like, what it would have looked like in a different time.

And so I think there’s something for me that’s very selfish, that’s fulfilled in a museum career because I am a lifelong learner, and this job enables me to learn things and get paid to do it, which is cool. And I don’t think I ever meant to be a public servant, but there’s also a public service aspect to this in that I’m turning it around and creating something to help educate the public, to help people connect with the history of their area, to help people connect with their own history, the history of their parents or grandparents, the larger, national story. I love surprising stories, surprising history, things that you weren’t counting on or coincidences in history, those kinds of things.

I think there’s two things about the work that we do that can be misunderstood or just not really thought about.

There’s just a lot of work that goes into these things. And I think that before I started working in museums, I didn’t necessarily appreciate that. You walk in and there’s the exhibit.

But an exhibit like what’s down there, that’s years in the making to take a story and make sure you’re telling it in a way that is just to the people who lived it, representative of the people who will be reading it and who live here, make sure that it is including all the stories that it should include, the people who should be included.

In a county as surprisingly diverse as Johnson County, even though we don’t think of it that way, there’s more diversity than people realize, I think. And so there’s a lot of thought that goes into the way an exhibit is written and the way the exhibit flows.

The second thing: I think — and maybe not people in Johnson County because they’re familiar with the institution — sometimes local history gets a bad rap. I think people who come to Kansas City and come to this museum are surprised because this also is a local history institution, but it’s on a national level. This is a pretty incredible museum.

I was not involved in creating that exhibit downstairs, I’ve helped modify things since then, add new content, switch things out, but coming here and seeing that as a county history museum was pretty amazing. That’s not your average museum. I think people don’t expect it. I think people don’t always have the appreciation for local history and what it can look like.