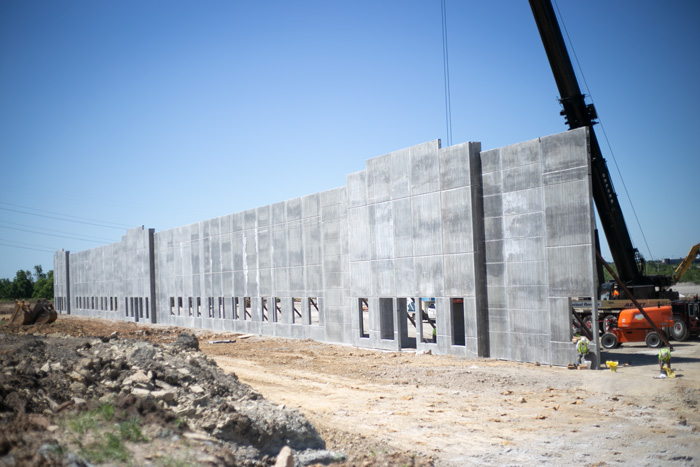 The Meritex Company has gone vertical with construction of its first surface-level industrial development in the Kansas City metro area. The project is located at 9800 Britton St., Lenexa.

The Meritex Company has gone vertical in the development of two new industrial buildings on a site above old mines in Lenexa.

Located at 9800 Britton St., the project includes two 120,000-square-foot buildings above the Meritex Lenexa Executive Park, the underground industrial park beneath the project that has more than 2.7 million square feet of space. Concrete panel walls began going up the first week of June.

The project is Meritex’s first surface development in the Kansas City metro area. The company also owns the executive park beneath the project. The site is just east of Lenexa’s Ridgeview Road construction project, which the city completed last month.

The new buildings will reach a height of 28 feet and are designed for industrial use such as storage, distribution and light manufacturing.

Mark Roseman, operations manager at Meritex, said they chose to continue moving forward with the project, despite the COVID-19 pandemic.

“We think it’s a great time for this project,” he said. “We evaluated when coronavirus happened, well do we stop and wait and see what happens? We had those internal discussions, and after looking at all our options, we felt like the project made sense regardless. Coronavirus is going to pass at some time. Corona or no corona, we think we’re in great shape.”

Roseman said Meritex bought the property in the late 1990s and started development on the abandoned mine. Building above ground was always part of the company’s plans, but the site was too far out in the countryside to be convenient for development.

“With City Center going up, the offices and all the apartments close by, you’ve got the Kiewit building, we’re kind of in the path of development, so it makes sense now,” Roseman said.

Bill Seymour, senior vice president of Meritex, said they take a “long-term view when it comes to our investments.”

“We believe that continuing this development helps pave the way for a positive reopening of the economy when it is safe to do so,” Seymour said.

Construction crews broke ground on the site in September 2019, and the project is expected to be complete by December, at which point tenants will be able to move in. Each building could fit up to six tenants.

Roseman said people often ask him if it’s safe to build above the old limestone mines.

“This building is 7 inches of concrete slab, a roof and of course the walls,” Roseman said. “When you think about a big building, it looks big, but it’s mostly air. The caves can handle it, and that’s not me saying it: The city requires we bring in a geotech engineer who evaluates the site, measures the rock thickness. They write a big report and say yes, everything is safe.”

In fact, what lies between the two industrial parks is about 80 to 100 feet of layers of rock and shale.

Roseman said development of other surface-level buildings on site are in the works, but it may be a few years before construction would begin.