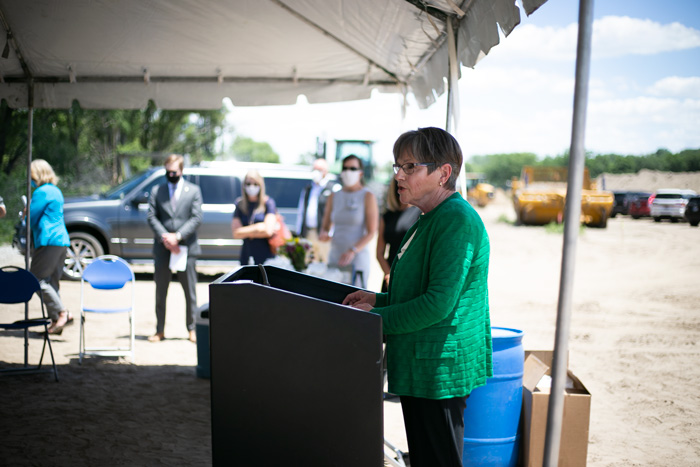 "This project is exactly what our state needs right now to boost the morale of this region and give hope to Kansans that we will get through this time stronger than we were before," said Gov. Laura Kelly at the groundbreaking ceremony for Heartland Logistics Park.

Blue Shawnee, along with the Shawnee Chamber of Commerce and the city of Shawnee, broke ground on Tuesday afternoon for Heartland Logistics Park, a sprawling industrial site planned near 43rd Street and K-7 Highway.

The groundbreaking celebrates the beginning of construction on the industrial park –which city leaders and chamber staff said is the most significant development in Shawnee in years. The park is expected to bring more than 1,500 jobs and house up to 2 million square feet of developed space.

Mayor Michelle Distler said the project has been in the works for 15 years, and it will eventually connect with a riverfront park in the same area.

“To see it finally come into fruition is exciting, to say the least,” Distler said. “Heartland Logistics Park will have a tremendous economic impact on our community and it’s so rewarding to see this vision come to life. We’re thankful to all the local leaders who have helped us get here.”

Kelly said bringing job opportunities to the state “is always cause for celebration,” but the timing of the project is “particularly significant” it will contribute to the economic recovery efforts moving forward.

“I can also appreciate that it’s not just enough to recover what we’ve lost. We need to diversify our economy to provide more opportunities and be more resilient in adverse times,” Kelly said. “This project is exactly what our state needs right now to boost the morale of this region and give hope to Kansans that we will get through this time stronger than we were before.”

The ceremony had been scheduled for April, but was delayed due to the COVID-19 pandemic. Nearly everyone on site wore masks.

Shawnee and KDOT teamed up to improve the public infrastructure for the area, including wastewater and public road improvements. Ann Smith-Tate, president and chief executive officer of the chamber and the Shawnee Economic Development Council, said this partnership was key to problem-solving for the development. She also thanked all involved to progress this development.

“Of course, none of this would happen if it wasn’t for the team behind Blue Shawnee,” Smith-Tate said. “They really stepped forward to take on a project that had been challenged from site issues and land acquisition, and were innovative and were able to pull all of this together.”