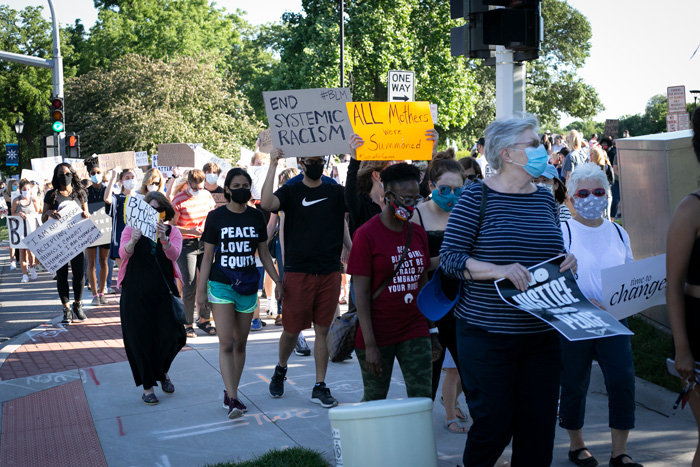 At the council’s Monday meeting, councilmembers and city staff discussed various revisions to earlier drafts of the statement. The final, approved version begins:

“As elected leaders who represent the City of Prairie Village, our hearts are heavy following the tragic and senseless killing of George Floyd and other people of color wrongfully killed or brutalized by police or armed vigilantes. Mr. Floyd’s death, and others who have died at the hands of prejudice, have evoked pain and anger for many within Prairie Village and throughout the nation. So their deaths will not be in vain, we pledge to fight systemic and individual racism. The countless number of race-related crimes against Black people throughout history and continuing to the present is appalling, inexcusable, and unacceptable.”

Police Chief Tim Schwartzkopf said the Minneapolis police officers charged in Floyd’s death and any other police officers who use excessive force or otherwise engage in misconduct should be held accountable. He spoke of the Stand Up for Black Lives march and rally held earlier this month in Prairie Village and expressed pride in his department’s and the community’s responses.

“Our staff had some very positive conversations with residents, and it was another time for us to listen to some of their concerns,” Schwartzkopf said. “Council, our department is committed to treat everyone with dignity, respect and without bias. I want you and our community to know that the Prairie Village Police Department thoroughly investigates any police wrongdoing or police misconduct or excessive force. We, too, will hold ourselves accountable for our actions.”

In describing the issue’s importance, Ward 4 Councilmember Sheila Myers referenced recent vandalism to a memorial marker in Kansas City, Mo., for Levi Harrington, a black man who was lynched in Kansas City on April 3, 1882, and said that racism was “still alive” and “isn’t going away.”

In suggesting revisions to the statement, Ward 3 Councilmember Tucker Poling removed a reference to city staff because he thought it was unfair to pressure them to sign statements on other issues that they might not agree with, he said.

“I know staff would all agree with all of these sentiments,” Poling said, “but … I think it’s really important to keep a line of separation between the role of elected officials and the role of staff. … This line of separation I think protects staff in the long term, and it protects the integrity of democratic government. … It’s not to slight staff; it’s actually to protect staff.”

He also described racism as “a problem of the present” and said it involved not only racial hatred but also unconscious bias. Ward 6 Councilmember Ian Graves agreed.

“There indeed are structural and historical reasons that lay out why all of us on this council are white,” Graves said. “And so, I think part of being anti-racist is being able to self-analyze your racial biases and how structural racism plays into that. We as a city can demonstrate that by calling out our structural history with racism and redlining.”

Ward 5 Councilmember Courtney McFadden, however, supported including city staff as signatories to the statement.

In the end, staff were excluded from the statement. Mikkelson supported having only the governing body sign it but said the body could encourage staff to sign it later if they wanted to.

Calls for other local elected bodies to take tangible actions to fight racism have been issued lately, including from Johnson County Commissioners Janeé Hanzlick and Becky Fast. In an editorial published Monday, The Kansas City Star’s editorial board argued that the Shawnee Mission School District’s recent pledge to tackle systemic racism in education had not been “backed up with a real commitment to diversity in the teaching and administrative ranks.”