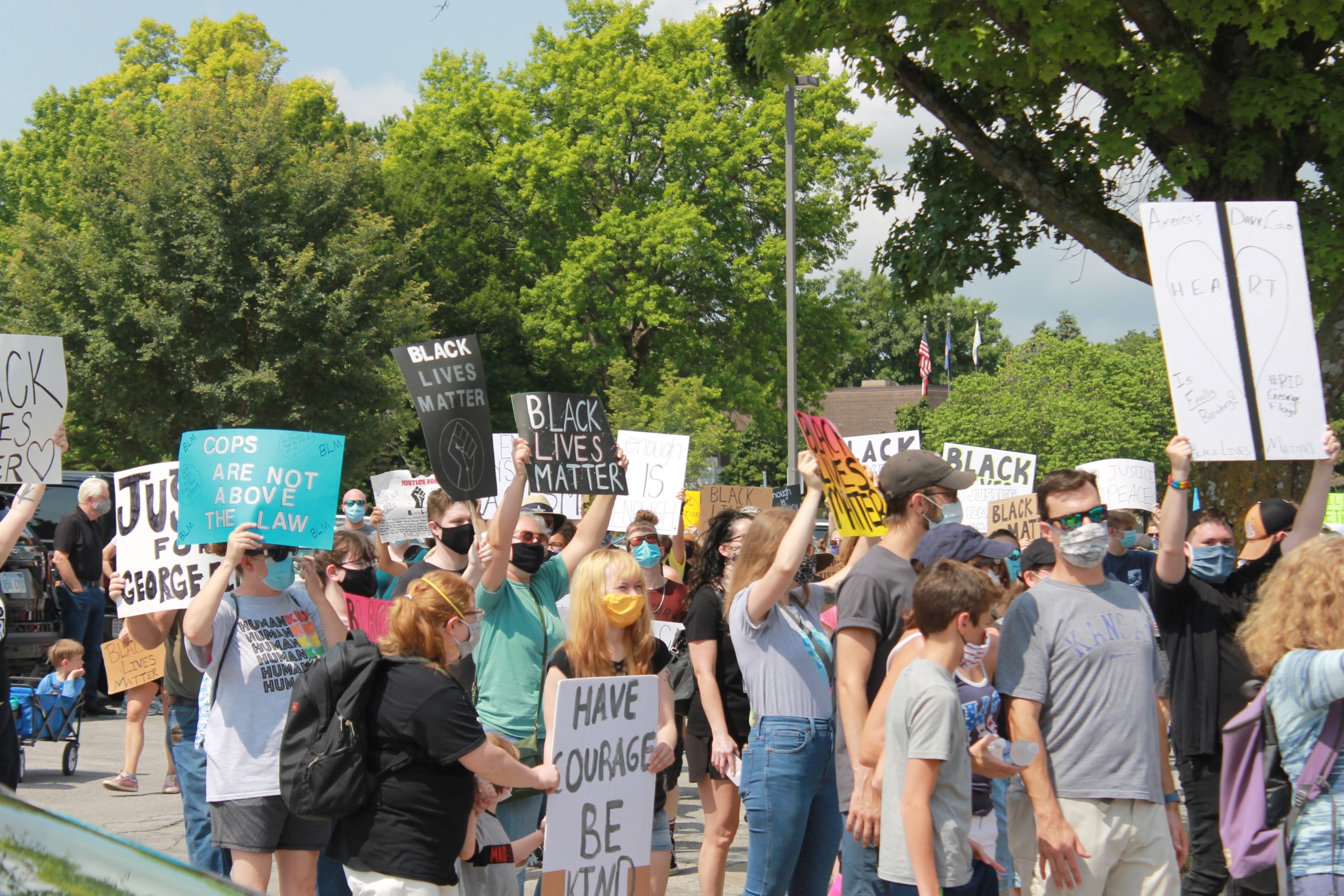 Hundreds of people gathered on Saturday in Overland Park for a march and rally supporting the Black Lives Matter movement. During the march down Santa Fe Drive from City Hall to Downtown Overland Park, participants chanted and sang.

Hundreds of people marched down Santa Fe Drive to downtown Overland Park on Saturday in the latest local show of support for the Black Lives Matter movement. Participants sang, chanted and shouted the names of people killed in officer-involved incidents.

Rally organizer and Overland Park native Linnaia McKenzie said she didn’t expect such a large turnout, but was pleasantly surprised.

Though she says she feels blessed to have grown up in the area, she said she’s often felt like the only Black person in the room.

“That has never really fazed me until I started to see the racial issues that were taking place between particularly white cops and Black people that are in communities and in the surrounding areas and also this community as well,” McKenzie said. “It was then that I realized that there may have always been these issues that I chose to ignore because of the love that I have for the people in my community.”

“If we don’t want it to continue around the world, the thing that we have to do is make sure that we start having these conversations directly in our community first,” McKenzie said. “I love Overland Park, this is my city, I’ve lived here for my entire life. I want to see us start, and catapult the change.”

A PUSH FOR MORE ACCOUNTABILITY

Not everyone was happy about the Overland Park Police Department’s involvement in the event. Sheila Albers said she’s been trying to force a change in local law enforcement policies since 2018 when her son John was killed by an Overland Park police officer. Along with increased transparency, she’s been fighting for the creation of a public safety task force within local law enforcement — a request she says has been ignored.

Since her son’s death, she says, the police department has been dishonest and won’t deal directly with the systemic problems that culminated in him being shot multiple times by a police officer who failed to announce himself.

“Mental health obviously played a role in the night my son was killed, but that’s not what killed him. What killed him was a poorly trained officer, who then got to walk away with no consequences,” Albers said. “If we don’t create better transparency and accountability, this will happen again. There will be another loss of life. The system won’t change, and they will sweep it under the rug, once again.”

Albers didn’t attend the Overland Park event, but says she supports the Black Lives Matter movement. She didn’t attend, in part, because she saw Donchez was going to be one of the speakers at the rally.

“Listening to him speak about social justice, equity and access is meaningless,” Albers said.

Jay Holbert, first vice president of the Johnson County NAACP, participated in the march and rally. He encouraged young people to register to vote.

“You need to get out and try to get things changed now while you can,” Holbert said.

In the future, McKenzie said she’d like to see more demonstrations like this throughout the area — hopefully some that include the whole Johnson County community.

“I’m excited to know that people are not saying that ‘Okay, I went to my rally, I’m good.’ This is a conversation that will continue on until it’s over,” McKenzie said.