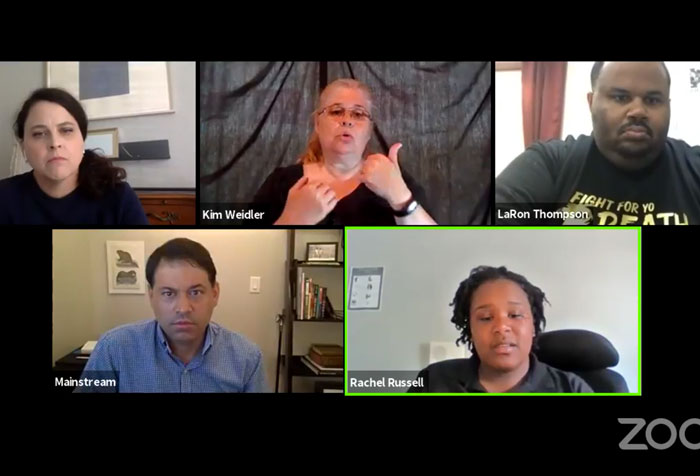 MainStream Coalition spoke with Rachel Russell and LaRon Thompson, bottom right and top right, for the first edition of its Continuing the Conversation series. Russell and Thompson provided insight on how white people can be better allies, and what might bring about change following the killing of George Floyd.

The MainStream Coalition is among local organizations actively engaging in difficult conversations about systemic racism sparked by the killing of George Floyd.

The political advocacy organization brought in guests Rachel Russell and LaRon Thompson — a community representative and pastor at Paseo Baptist Church, respectively — to discuss diversity, equity and inclusion for the first edition of its Continuing the Conversation series. Russell and Thompson touched on how change can come about, like uprooting current systems.

“I think it really is the systems that we need to reform in order to see change,” Russell said. “We need to see them in our school systems, in our health systems, our employment networks. All of those systems were not created for black and brown communities to succeed.”

Executive Director Michael Poppa asked what might cause people of color, but especially black people, to be hesitant about voting — something Poppa said he believes will be a driving force in the fight against racism. While voter suppression is one factor, Russell said black and brown communities lack civic engagement education.

As the conversation continued, Poppa asked Thompson and Russell for advice for white allies who want to help, but might not know how. In addition to using white privilege for good, Russell said white people need to have uncomfortable and intentional conversations about racism with their children.

Thompson, who agreed with Russell, provided Poppa with an acronym to help become a better ally: make it L.A.S.T.

“Listen, act, support and teach,” Thompson said. “Listen to your black friends, act on the needs that they have relevant to the movement, support the movement and then teach your children the importance of equality in America.”

Additionally, Russell said it is up to white people to educate themselves and end racism. Black people have made numerous videos and written plenty of books on how it can be achieved, and black people can no longer carry the burden of educating white people, she said.

Below is a recorded video of the conversation, followed by a time code outlining the topics discussed. The next Continuing the Conversation will focus on white privilege and unconscious bias with guest Loretta Summers. The Tuesday, June 23, conversation will be streamed live on MainStream Coalition’s Facebook from 1 p.m. to 2 p.m.

‘Begging for my life to be recognized:’ Calls for change at Black Lives Matter demonstration in Shawnee