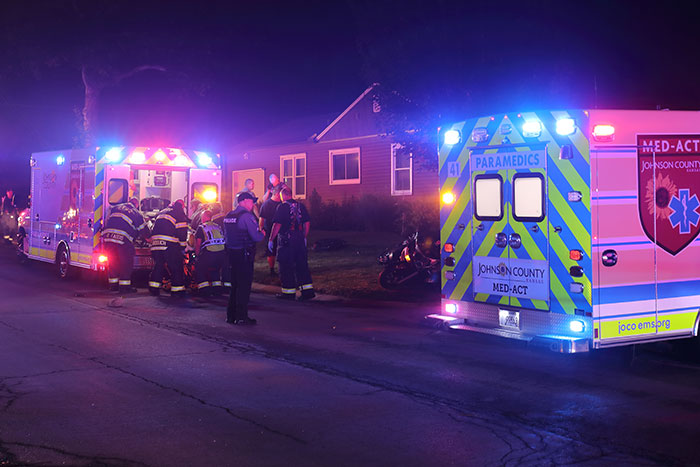 Johnson County plans to buy a 64-year-old, mold-plagued building on Roe Avenue so Med-Act can provide timely ambulance service to residents of Prairie Village, Overland Park and Leawood. The cost to buy it and make it habitable is estimated at $850,000.

County commissioners voiced concern that close to $1 million for an aging building with problems might not be a good buy. But the cost and rarity of available real estate in the area convinced the majority to go ahead with it anyway. The vote was 6-1, with Commissioner Michael Ashcraft the lone dissenter.

The 6,489-square-foot building at 9011 Roe Avenue was built in 1956 and had been occupied by Consolidated Fire District No. 2 and Med-Act since 1987. But in 2019, the Fire District moved out to a new location. District officials recently notified Med-Act, the remaining tenant, that they intended to sell the building.

The appraised value is $740,000, but the county is buying it for $500,000 due to the building’s condition. County staffers said it will cost another $350,000 to make it safe to occupy. Med-Act has temporarily moved out of the building, but plans to move back in once repairs are made.

Commissioners expressed unease at the prospect of sinking more money into an already old and troubled building. The $350,000 only makes it safe to inhabit but does not upgrade it. Commissioner Becky Fast wondered if the building needed to be torn down.

Likewise Commissioner Mike Brown worried that the cost of upkeep could be much more than planned. “We don’t know where the bottom is,” he said.

But county staff said the building appeared to be the best prospect to arise in months of shopping.

The county has been searching since September 2019 for appropriate space for Med-Act to serve the northeast part of the county, said Nicolle Welsh, deputy director of facilities management for the county. For most of that time, no viable alternatives were found. She said recently two properties became available – a car wash for $2.4 million and half-acre property for $900,000.

Staff also looked at what it would cost to build from the ground up. The answer: About $3 million plus land acquisition, Welsh said.

The Roe Avenue building might allow Med-Act to eventually close another facility at 8500 Grandview Lane in Overland Park and possibly save on services, she said.

Ashcraft said he wants to have good response times, but questioned the return on investment for the purchase, and asked commissioners to consider whether the county was using the best business model. He and Brown, who have rural areas in their districts, said people in the countryside need quicker response times, too.

Paul Davis, director of Med-Act, said the return is in having the ambulances in a place where they can reach the densely populated northeast in the least amount of time.

Commissioners Jim Allen agreed. “As far as return on investment, these are people’s lives and the medical director is saying that the proper location is this location. There’s not a lot of property in Prairie Village for sale.”