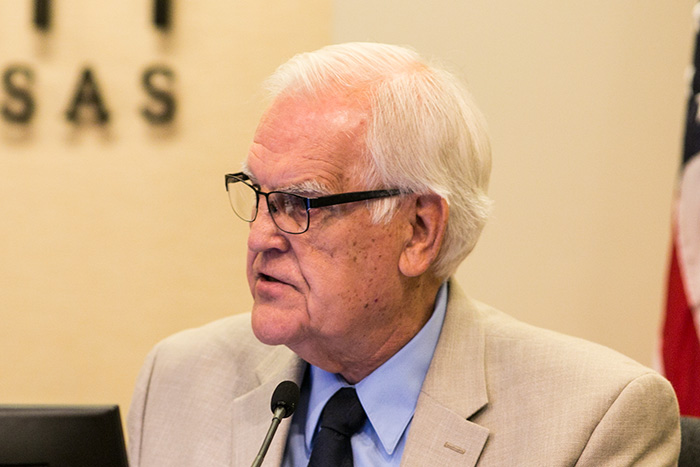 “The actions that we had to take in the past several weeks have been the most difficult decisions that I’ve had to make, that all of us on the commission had to make,” said County Chair Ed Eilert. File photo.

Johnson County’s response to the COVID-19 pandemic and the nationwide movement against police brutality and systemic racism dominated Johnson County Board Chairman Ed Eilert’s remarks in an address hosted via webinar by the Shawnee Chamber of Commerce on Wednesday.

After shutting down sectors of the economy in mid-March, Johnson County is slowly reopening this summer. All businesses in Johnson County are able to open at this time, and Johnson County is operating under Phase 3 of the Ad Astra plan, which ends June 22. Eilert urged all residents to continue social distancing, cleaning and personal hygiene regimens and other health and safety measures.

The COVID-19 shutdown has resulted in an expected budget shortfall of roughly $15 million (initial projects were almost double that), and another projected shortfall of $8-10 million next year. Cities across Johnson County expect similar shortfalls.

To make up for the difference in budget shortfall, Johnson County had a freezing hire and furloughed many employees. The general fund budget for 2021 is expected to be about $413 million, and reserves are estimated at $322 million.

Meanwhile, many businesses are still struggling from the shutdown and the academic year was cut short for all schools and colleges. At times, the county commission has split on balancing public health with workers’ need for jobs and income.

“The actions that we had to take in the past several weeks have been the most difficult decisions that I’ve had to make, that all of us on the commission had to make,” Eilert said.

Johnson County received $116 million from the CARES Act for COVID-19 response efforts, Eilert said, noting that county leaders are planning to develop a process for that response and how those funds will be used.

“I don’t anticipate that we will just be handing out money because there will be audits, the federal government tells us, and money that has been misappropriated will be required to be returned,” Eilert said. “So we want to be diligent in our process so that we don’t put taxpayers at risk in the future for making loans or grants that would have to be subsequently returned.”

Instead, the CARES funds can be used for testing, personal protective equipment and supplies for first responders and healthcare providers, and other uses related to the COVID-19 response. At this point, Johnson County estimates being reimbursed about $30 million, Eilert added.

The CARES dollars can also be used for hazard pay for first responders working for cities in Johnson County. Nonprofits, hospitals and other business entities assisting in response efforts may also qualify for some funding.

Johnson County receives COVID-19 testing materials from the Kansas Department of Health and Environment, KU Health Services, Quest Diagnostics and Viracor. It costs the county about $70 per test working with Quest and Viracor. Johnson County has tested about 29,000 residents and hopes to conduct a total of 50,000.

Additionally, Johnson Country District Court has a “big backlog of cases” because court staff have not been able to work on all court activities virtually. The courthouse in Olathe opened with limited capacity on Monday.

Nationwide protests and local police response to the anti-racism movement

Regarding the nationwide protests sparked by the killing of George Floyd, Eilert said Johnson County has received several inquiries from residents about the county’s criminal justice system.

Eilert said the county’s Criminal Justice Advisory Council, established in 2008, addresses criminal justice issues and makes recommendations, including for juveniles and residents with mental health or drug addiction issues. When residents with mental health and/or drug use issues end up in Johnson County jail, corrections officers collect and share data on those individuals with Johnson County Mental Health. More information is on the Johnson County Sheriff’s Office website.

“We have been very, very active in modifying and putting in place positive actions that are followed and used by not only the sheriff’s department but also the cities’ police departments,” Eilert said, directing listeners to the Johnson County Sheriff’s Office website for resources on use of force and sheriff’s programs that “emphasize equal justice for all.”