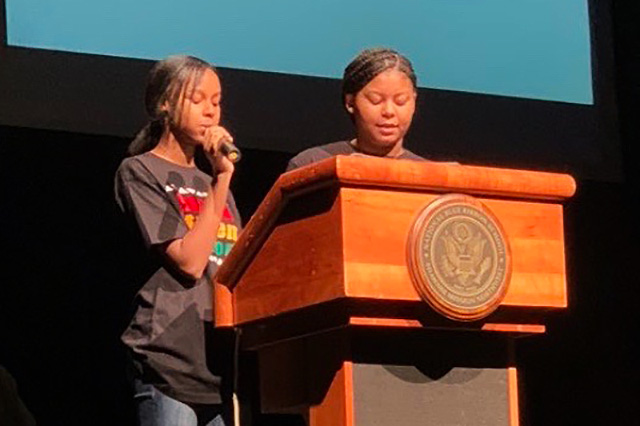 Immaculee Muragizi (left) and Naudia Thurman at a Black History Month presentation at SM Northwest. The students, who are leaders in SM Northwest's Black Student Union, are among those who say the lack of teachers and administrators of color in the district poses major concerns. Submitted photo.

As racial equity and the Black Lives Matter movement rise to the forefront of the national conversation, some students of color in the Shawnee Mission School District say they’re preparing for the potential of tense interactions this fall – and they’re not sure which authority figures at their schools they will be able to turn to about racial issues.

Naudia Thurman, a rising junior at SM Northwest and the president of the school’s Black Student Union, hasn’t had a teacher of color throughout her years in Shawnee Mission schools, which she’s attended since first grade.

“We don’t have classes in our school that teach about Black history, Hispanic history,” Thurman said.

And she’s seen her classmates express divided opinions about the protests and Black Lives Matter movement on her social media feeds, with about 50% in support and 50% opposed.

“When we do go back to school, after all this stuff has happened, who is going to be there to stand up for us?” Thurman asked. “People are going to act very differently, we know they are. So my biggest thing is, who will be there to speak up for us?”

The number of black and brown students in the Shawnee Mission School District has been rising for decades. Between 1994 and 2004, minority enrollment increased from about 9% to 20%. Since 2004, that trend has continued, with minority students making up 36.5% of the student population today. Yet, like hundreds of schools across the country and within the Kansas City metropolitan area, teacher demographics have not kept up with student demographics: During the 2019-2020 school year, about 96% of teachers in the district were white, according to self-reported data.

Shawnee Mission is not alone in this challenge. Hundreds of schools across the country, as well as other school districts within the Kansas City metropolitan area, are up against a similar phenomenon. In the nearby Blue Valley school district, about 92% of teachers were white during the 2019-20 school, while about 28% of their students were minorities. At Olathe Public Schools, 93.8% of teachers were white during the 2018-2019 school year, while 33% of students were minorities. And at the statewide level, 91% of teachers in Kansas were white in the 2019-2020 school year.

Last June, the district committed to a set of equity and inclusion initiatives, including a plan to “ensure a culture of diversity through recruitment and hiring practices and procedures.” In light of the killing of George Floyd and nationwide protests against police brutality against people of color, Superintendent Mike Fulton addressed these efforts at the district board meeting last Monday — one year after the plan’s implementation.

“One of the things that we’ve tried to do through our work over the past couple years is to really lay out some plans where we make sure we are looking at our work through the lens of equity,” Fulton said. “…That’s why the human resources department has really been doing a great job of aggressively recruiting at historically black colleges and universities.”

“They’re working hard to try to recruit, retain and create, through the development of Grow Your Own, a core of educators that’s more reflective of the children that we serve,” he added. “That can be race, that can be gender, that can be all kinds of human attributes, but we need a diverse workforce to make sure we’re doing a great job of reaching out to every single child that we serve.”

But progress thus far has been limited. Data provided by the district for the past three years shows that the number of minority teachers is inching up: In the 2017-18 school year, 70 teachers employed identified as a racial minority. That number increased to 78 in 2018-2019 and 82 in 2019-2020.

A look at efforts to recruit more teachers of color

One year into the strategic plan, the district is pointing to efforts to “establish partnerships with post-secondary institutions that promote diverse candidates in education,” such as Historically Black Colleges and Universities (HBCUs). District officials note this effort was necessary because the diversity of teaching candidates emerging from in-state and nearby teaching programs is limited: 83% and 88% of individuals enrolled in teaching preparation programs in Kansas and Missouri, respectively, were white during the 2017-18 school year, which was the most recent available statewide data.

Starting in 2018, the district expanded their recruitment efforts geographically to include at least eight HBCUs and over 25 schools with diverse student populations in the country’s southeast and Northeast regions. In addition to HBCUs, the district targeted the most ethnically diverse colleges in America, institutions with the best value education degrees and top colleges for Hispanic students.

They also planned to recruit in the southwest this spring, though the coronavirus pandemic prevented their scheduled visits. This effort comes as the district recognizes “the need of trying to get more Hispanic teachers,” said Michael Schumacher, the director of Secondary Human Resources who has overseen these recruitment initiatives. In the 2019-20 school year, Hispanic students made up about 19% of total enrollment, while they made up less than 1% of teachers.

Schumacher said that many candidates from outside the region are deterred from opportunities in Shawnee Mission because of the long move away from home. Additionally, the team participating in the country-wide recruiting effort has not had a focus on diversity within itself, which Schumacher said is going to change this year.

“Traditionally one of the things that we do…is we have brought with us other administrators,” said Schumacher. “I’m of Hispanic descent, but we don’t have any African Americans on our HR team. One of our efforts in this coming year (is) to try to make sure what we’re showing (and) representing is that of a diverse team.”

In addition to partnering with HBCUs and expanding geographic recruitment, the district’s strategic plan lays out five other action steps for increasing staff diversity. These include:

For some parents who have been lobbying the district to get serious about addressing diversity and inclusion issues in the district, the lack of substantial progress on the recruitment and hiring front is a point of continued frustration.

For several years, a group of SMSD parents known as the Diversity and Inclusion committee have been requesting and recommending steps the district take to prioritize and improve diversity. In February 2019, the group presented 13 recommendations to the district, one of which asked the district to “recruit and retain diverse and culturally competent administrators, faculty and staff.”

Anisha Jackson, SM West parent, says two years after she met with Fulton and one year into the strategic plan, sufficient progress has yet to be made.

“Fast forward to today, unfortunately it seems that we are taking several leaps and bounds backwards,” Jackson wrote in an email to Fulton and member of the school board on May 7. “With the lack of minority representation in leadership district wide, SMSD will never achieve an equitable plan for all…”

Jackson specifically pointed out lack of diversity at the administrative level, noting that administrative team at Shawnee Mission West High School was all white and male. According to self-reported data, about 92% of district administrators were white during the 2019-2020 school year.

“What happens a lot of the time (is) black students just stop reporting situations that they’re dealing with, whether it be with a teacher, faculty, staff, or another student, because they know it’s going to fall on deaf ears,” Jackson said.

Bernie Winston, a parent whose daughter graduated from SM East last year, said she was pleased to see the district’s strategies for recruitment of minority teachers. But she believes increased and improved communication between the district, parents and other community members is essential. Currently, teacher demographic data is not available on the district’s website.

David Smith, the district’s chief communications officer, said that the data is public information but not posted online, and that updates regarding the strategic plan are made at bimonthly board of education meetings.

Going forward, Winston aims to create a diversity and inclusion advisory council for the district, made up of parents, teachers and administrators. She hopes this will provide a forum in which community members can receive updates on related policies and initiatives, as well as add their own input and suggestions.

Students share experiences with lack of teachers of color

Students at SM Northwest and SM East spoke of their own experiences, many times never having been taught by a person of color throughout their time at SMSD.

This was the case for Kiera McDonald, a rising junior at SM Northwest who has been in the district since grade school.

“Personally for me, I didn’t notice it until seventh grade, and I remember looking around and thinking, I cannot name one teacher who is not white,” McDonald said. “These teachers are supposed to prepare you for life, and none of them are people of color. The message that it puts out isn’t really encouraging.”

Studies have shown that minority students benefit from having a teachers looks like themselves, including better performance on standardized tests, improved attendance and less frequent suspensions.

“Not seeing someone who looks like you, and not seeing someone who you feel like is going to understand every single angle and part of you, definitely effects education,” said Lillian Williams, a rising junior at SM East. “I think black youth in general…feel like if they’re quiet and keep their heads down, they won’t be seen as a product of stereotyping and a product of what their race is seen as.”

Thurman and Immaculee Muragizi, a rising junior at SM Northwest and the vice-president of the Black Student Union, also noted that having more teachers of color at their school could increase the number of mentors for students of color and authority figures willing to call out racist behavior. Muragizi said she has been in multiple classrooms where teachers have not disciplined students for saying racial slurs or racist remarks.

“I feel like that’s what happens a lot in classes, the teachers just look away and don’t say anything about it,” Muragizi said. She added that her BSU teacher sponsors and principal have provided her support and validation when she has experienced this in the past, and she feels comfortable coming forward to talk with them.

“There are pretty much only two teachers in my school that I would feel comfortable addressing certain things” such as being called an offensive name, Thurman added. “And those are my BSU sponsors.”