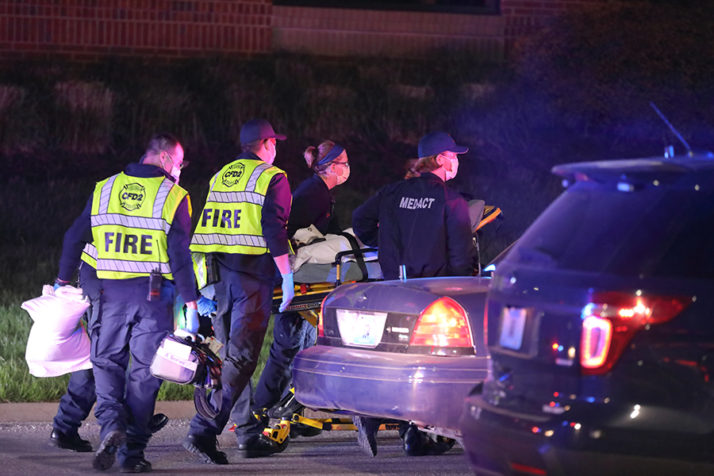 Supporters of the hazard pay initiative argued it's necessary because police and firefighters are more exposed than the general public to the coronavirus. Although councilmembers on the committee said they sympathized, they did not move the item forward after hearing it could cost as much as $260,470 a month. Above first responders transport a man to an ambulance. Photo credit Mike Frizzell.

A number of Overland Park first responders watched over Zoom as a proposal for hazard pay died in committee Monday night. Although city council members on the committee said they sympathized, they did not move the idea forward towards a vote by the full council after hearing that giving police and firefighters hazard pay could cost as much as $260,470 a month.

Councilmembers Faris Farassati and Scott Hamblin pushed for hazard pay because police and firefighters are more exposed than the general public to the coronavirus. They are even more exposed than hospital workers, Farassati said, because hospitals have higher level protective gear and more control of the environment. The councilmembers have been pushing for the hazard pay initiative for months.

“You have 50 police officers, first responders, (emergency medical technicians) and their families watching and I don’t want to disappoint them,” Farassati told members of the council’s Finance, Administration and Economic Development Committee. “The financial burden is not that back breaking. This is not the place to fill this budget hole.”

Members of the committee said they support the first responders and want to help. “If I had the money I’d write it out myself,” said Councilmember Jim Kite. But times are “desperate” he said.

“This whole thing breaks my heart. I wish we could increase pay for a lot of our folks,” including others who have significant public contact, Kite said.

Farassati said earlier he expected a big turnout at the remote meeting because police and firefighters have been following it closely. Police employees planned to attend remotely, using a picture of Mike Mosher as their screen identification, he said. Mosher, former president of the Fraternal Order of Police, wrote a letter of support a few days before he was killed in the line of duty on May 3.

The union’s executive board wrote another letter in favor of hazard pay June 17. “Police officers can’t take a violent criminal to jail via Zoom,” it said. “We have gone ‘Above and Beyond by Design’ for you and hope you can see the importance of doing the same for us.”

Mosher’s widow, Corinne Mosher, also sent word in support of hazard pay, which Farassati read. “You ask our officers to continue to serve us with the same attention and professionalism that has become synonymous with the title of “Overland Park Police Officer”, to endanger themselves and their families in order to serve us. And they have answered that call. Let me warn you in the strongest energy words on paper can produce that the eyes of the community, and ultimately the nation, are turned upon you, waiting for you to step up and take care of the heroes who take care of us,” she wrote.

There was not a public comment period during Wednesday’s meeting.

The hazard pay idea has been in the works since shortly after the pandemic began in earnest in early April. That month the city council supported a delay in a scheduled pay raise affecting the police and fire departments as well as other city departments.

The pay raises did go into effect retroactively, although not all officers received the full amount originally planned, said City Manager Bill Ebel.

Farassati and Hamblin have been trying to get hazard pay since then and were told the FAED committee discussion of the budget would be the appropriate place to start. Neither is a member of that committee.

Ebel also ran some figures on what it would cost to include other city employees who have significant public contact. Adding employees from public works, parks and the courts, among others, would have cost from $384,300 to $96,075 a month.

Some committee members said they regret not being able to do more for the responders.

Kite said the pay increases responders got were still better than many other city departments, and the fact that the city made good on them, “shows where our heart is.” Pay increases amounted to 4.78% for police and 7% for fire personnel. Non-public safety employees saw increases of 1.75%.

Councilmember Logan Heley said people should urge their congressional and state representatives to free up money to help cities with these issues.

Kite and Farassati disagreed over the relationship between tax incentives for business and hazard pay, and some referenced the adversarial emails and tone the issue has taken on.

Farassati has often said the city would have more money in reserves for such emergencies if it hadn’t agreed to forego some future tax revenue to encourage development. Kite disputed that, saying the bad budget situation is due to the recession caused by the pandemic.

Kite said he disliked the adversarial tone the issue has taken on. Speaking to the police families observing, he said, “This council cares about our police and we’re sorry for the loss the Mosher family had. That’s what breaks my heart regardless of the sarcasm we heard from Farassati,” he said.

“I regret that this was made to be an adversarial situation. It’s unsettling to have good people lined up against good people,” he said.

The committee adjourned without taking a vote on the issue.