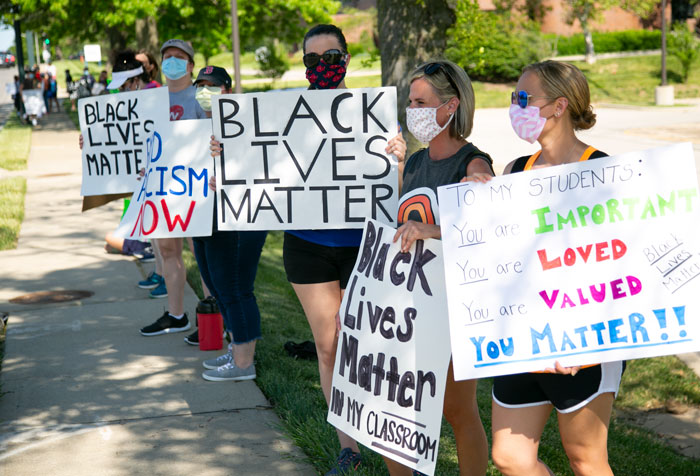 The Kansas City Star editorial board noted that the Shawnee Mission School District has pledged to fight racism, but teachers are predominantly white. Above, educators protest at a Black Lives Matter demonstration on June 12 near Oak Park Mall.

Shawnee Mission must follow up on pledges to address racial inequities with real action, argues editorial

In an editorial published Monday, the Kansas City Star’s editorial board argues that the Shawnee Mission School District’s pledge in recent days to tackle systemic racism in education has not been “backed up with a real commitment to diversity in the teaching and administrative ranks.”

People of color in teaching and administrative roles remain a slim minority in the school district, and a lack of diversity among teachers and administrators prevents the district from offering equitable education opportunities to all students, the editorial board determined in its piece, noting that while Shawnee Mission’s student population has become more diverse in recent years, faculty and staff are still predominantly white.

“Tackling systemic racism and inequality is tough but essential work,” the editorial board wrote. “If Shawnee Mission school leaders are serious about educating all students, then they must follow up promises with substantive action.” [Shawnee Mission schools want to tackle racism. But leaders, teachers are mostly white — The Kansas City Star]

The Shawnee city council on June 8 voted 7-0 to adopt a resolution directing property owners to repair or demolish a fire-damaged home at 4822 Bond St. within 90 days and ensure the premises is safe and secure. More than 85% of the property was damaged by a fire on Oct. 28, 2019.

Per state law, the insurance company already paid out 15% of the insurance money to the city, since the damage was more than 85%, according to a city staff report.

Tyler Wirth, chief building official for the city, said the owners, Martin and Catherine Sower, are working on improvements and have already obtained a building permit and made progress. If the structure is removed or repaired on time, then the city will return the insurance money to the owners.

Wirth said the owners have made “great progress” but the home still has some violations as a space that is not yet livable, such as no utility connections, a boarded up door and an open electrical system. Wirth said the contractor plans to complete improvements in July.

The city also voted 7-0 to set a public hearing for another fire-damaged structure that may need to be repaired or removed. The public hearing is set for July 27 to review the report on this structure located at 6661-6663 Park St. Councilmember Mike Kemmling was absent.

The city of Roeland Park Monday evening approved an amendment to the Boulevard Apartments development agreement.

The Boulevard Apartments owners asked for the development agreement to reflect that the bonds issued, which are now retired, are no longer a liability. The request comes as the owners are working on a refinancing, according to city documents.

The City Council passed the amendment unanimously and with no discussion. Councilmember Jennifer Hill was absent.