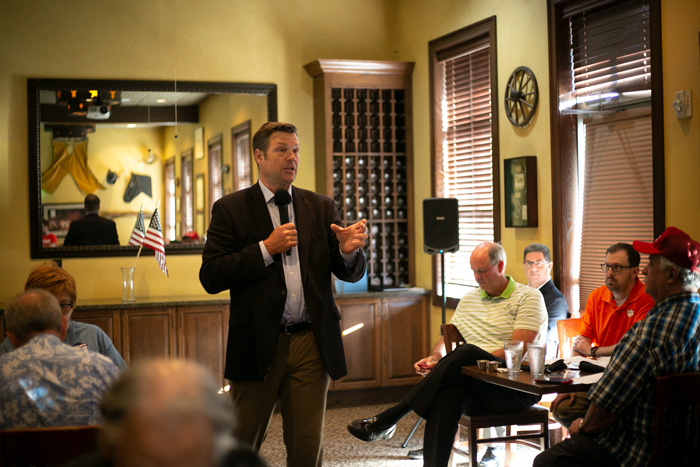 Kris Kobach, U.S. Senate candidate, discussed the federal budget deficit, rising unemployment and illegal immigration among other items in his remarks to the Northwest Johnson County Republicans on Monday evening.

The COVID-19 pandemic and nationwide anti-racism protests have shed light on divisions along party lines, said Kris Kobach, a Republican candidate for U.S. Senate, during a presentation to the Northwest Johnson County Republicans on Monday evening.

Kobach said major issues he expected to see this year include rising unemployment, extra federal relief spending from the COVID-19 shutdowns, and efforts to defund police agencies. If elected, Kobach said he hoped to reduce unemployment, cut back on the federal budget deficit by slashing spending, and ensure law enforcement remains intact. Kobach served as Secretary of State of Kansas from 2011 to 2019 and was the Republican nominee for governor in 2018.

Kobach also focused discussions on illegal immigration, constitutional law and reducing the size and scope of government. He made the appearance Monday before a group of roughly 40 conservatives at Hereford House, which capped the headcount at 45 for health and safety reasons during the pandemic.

Kobach said he believes governors are being discriminatory against religious expression during the pandemic.

“Why is it that it is dangerous for a hundred people to congregate and worship God together in their church, even though they’re 6 feet apart, why is that dangerous but it is not dangerous for a thousand people to be shoulder to shoulder, shouting and in shouting, spitting saliva?” he asked, referencing the demonstrations in support of the Black Lives Matter movement. “The answer is because it’s politically correct to do the Black Lives Matter protests. Where is the science in that? That is the madness we face from the left right now.”

Kobach also favors building the wall between the U.S. and Mexico as well as further restrictions to reduce illegal immigration. Noting his support for travel restrictions from China earlier this year, he believes that the federal government should do more.

“That’s closing the front door,” he said. “The coronavirus makes clear to us that if we have another outbreak of a different virus, we may need to close our borders to people from some other part of the world, or to close our country. That’s the first thing you do. If we have a wide open back door, we will never be able to do that.”

Kobach is concerned that foreign nationals will compete with American citizens for jobs with rising unemployment due to the pandemic. Citing extra relief spending from the CARES Act due to the COVID-19 shutdowns, Kobach said he’s against further budget deficits.

“We cannot sustain $1 trillion deficits year after year after year,” he said. “It’s not only unsustainable economically. It’s immoral because we’re asking our kids and our grandchildren to pay for our spending. The coronavirus has put us in an even worse position than we were four months ago with respect to federal spending, so we’ve got to cut it.”

About our campaign coverage

In an effort to give voters a sense of where the people seeking to represent them stand on the issues that affect our community, the Shawnee Mission Post has a policy to attempt to cover as many public appearances in northern Johnson County by candidates running for statewide and federal office as possible.

If you know of an appearance by a such a candidate that’s coming up soon, please let us know.