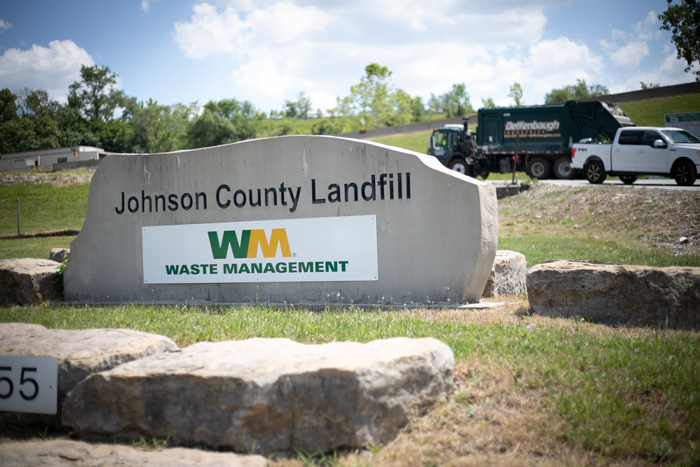 Shawnee has agreed to extend Waste Management’s special use permit to continue operating the Johnson County landfill on Holliday Drive.

The Shawnee planning commission on Monday night unanimously agreed to extend Waste Management’s special use permit to continue operating the Johnson County landfill on Holliday Drive west of I-435.

In a presentation via Zoom with the planning commission, Mike Hey, district manager for Waste Management, said waste collections are reaching the top of an active disposal cell on site. Waste Management is slated to move the active disposal cell to a new spot on the western side of the site by October, which should resolve any lingering odor issues.

Waste Management is also using a new odor tracking system and a new hotline for complaints. Plus, the company is tasked with adding the Midland Drive underpass for litter pickup, in addition to the other surrounding areas.

In addition to ongoing conditions for the special use permit, Waste Management is also required to maintain the following new items:

Last year, the city of Shawnee received 545 odor reports. From July through mid-September, staff typically sees an uptick in reports due to hot weather spells and westerly winds, according to a staff report. Most complaints come from the area around Lake Quivira just east of the 440-acre site permitted for the landfill.

City staff noted that Waste Management has also been sweeping mud and duster from the Holliday Drive entrance to the landfill, resulting in a reduction of complaints.

Hey noted that Waste Management staff is discussing how to best manage the free recycling site at the entrance to the landfill. The site is getting cluttered and overwhelmed with drop-offs and illegal dumping of trash, he noted.

“This isn’t a Shawnee problem; this is a problem all over the country where we have unmanned recycling drop-offs,” Hey said. “The idea was a good idea to provide a place for people to come that might not have access to curbside recycling, that sort of thing, but what it’s resulted in is a lot of bad behavior. You’re hoping that people will just do the right thing, and that just isn’t the case.”

Waste Management plans to keep the recycling drop-off, but leave it open only during business hours, “to see if we can curb some of the illegal dumping that’s occurring in this area,” Hey added.

The planning commission expressed interest in keeping the free recycling site and suggested the company have personnel keep watch during business hours.

The special use permit is up for review again in June 2024. The planning commission has also asked the city staff to provide a report of the landfill operations in two years.

The permit is in effect until September 2043. Hey said the landfill has about 39 million tons of disposal capacity, enough space until the permit discontinues.