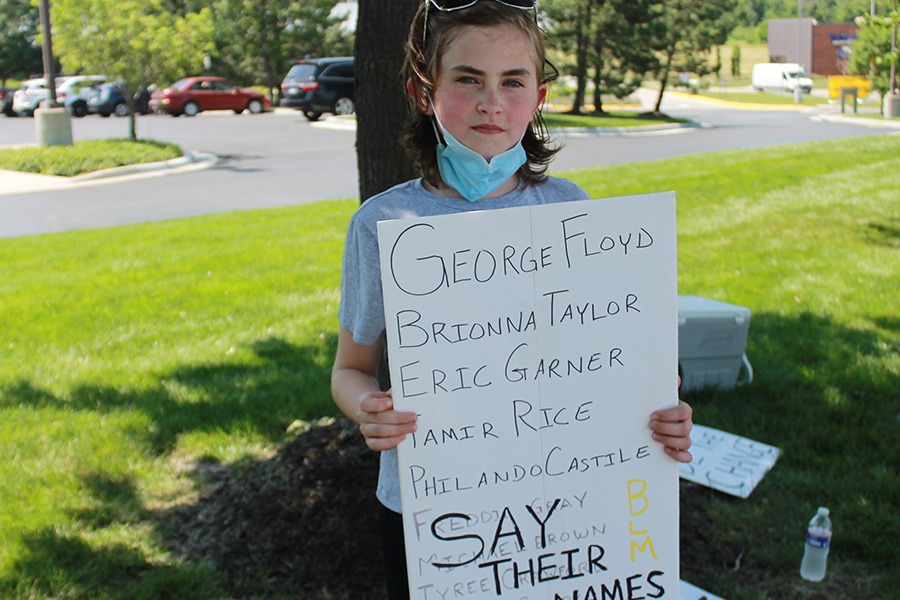 Nate Petrowsky is a 12-year-old boy from Shawnee who set out to take a stance against injustice. He plans to protest near the library on Monticello every Sunday for the foreseeable future and stand in solidarity with the Black Lives Matter movement.

A couple of weeks ago, 12-year-old Nate Petrowsky heard about Black Lives Matter protests on the Plaza and told his mom that he wanted to help out.

“What Nate actually said to me when he first came up with this was that he wanted to use his privilege for good, because we talk a lot about the fact that he’s born a white male and he’s got a lot going for him,” Nate’s mom Meaghan Petrowsky said. “It’s his responsibility to reach down and make sure that everyone else has those opportunities. And so it’s important to us for him to recognize that and I’m so proud that he has.”

With the help of Facebook and some emails, the plans were set. Each Sunday afternoon from 1:30 to 3:30 p.m., they plan to gather near the Johnson County Library off of Monticello Road “for the foreseeable future,” Meaghan Petrowsky said.

This past weekend was the second weekend they gathered, and some 70 people joined them with signs naming black men and women who died in police custody, including George Floyd and Breonna Taylor.

“I think it’s really horrible that people are killing and hurting other people just because of the fact that the color of their skin is different from their own. I think that it’s awful that so many people are just ignoring it because it doesn’t directly affect them,” Nate Petrowsky said. “And even if they think that it doesn’t affect them, it does, because they’re humans, too.”

Ronette Hoard heard about the protest because she attends the same church as the Petrowsky family. She led chants during the demonstration.

Hoard, a mother to a young boy, said she wonders when people will stop perceiving him as a “cute” little boy and start seeing him in a different way.

Nate Petrowsky said he hopes to see more people his age take a stance against injustice.

“I think that they could be doing protests like this, and showing all the support that they can for the Black Lives Matter cause, and just not treating anyone any differently because something that they have no control over,” he said.

“I think that these kids are gonna be the ones who are responsible for carrying forward a society that is, hopefully, steps beyond in terms of equality and inclusion. But more importantly, I think that at this age, it’s important for them to know that they do have a voice, and that using that voice is really important — not only to influence kids around them, but adults around them as well,” Meaghan Petrowsky said.

To participate in the youth-led protest, participants are asked to park in the Monticello library parking lot. Additionally, those who wish to join are expected to wear masks, practice physical distance and bring their own water bottles.