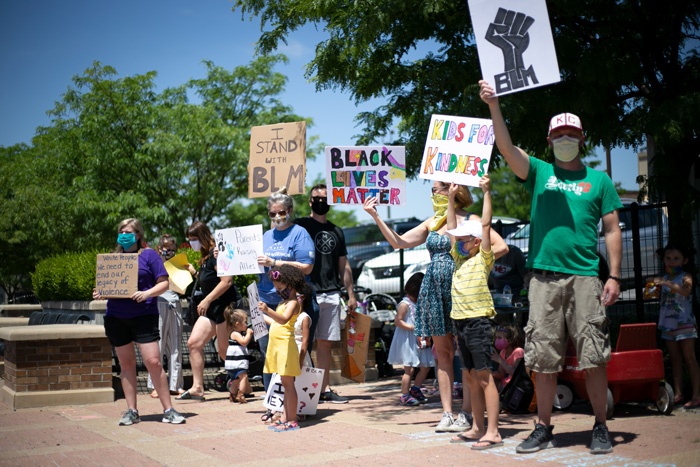 Dozens of parents and children demonstrated in support of the Black Lives Matter movement Saturday afternoon in front of Shawnee City Hall. Parents saw it as a teaching moment.

About 50 parents and children gathered Saturday afternoon in front of Shawnee City Hall to demonstrate in support of the Black Lives Matter movement. Parents described the protest as a teaching moment for youngsters with questions about civil rights and activism.

Jenni Wadle, a Shawnee mom who organized the event, said she started a Facebook group two weeks ago for parents to collect resources and support for teaching their children to be vocal allies. Soon after starting the group, Wadle began planning the kid-friendly demonstration.

“I’ve been going to protests lately and my son has been watching me make signs and asking me a lot of questions about what protests are,” Wadle said. “I just wanted to give him that experience. I think that kids are seeing a lot of scary things on the news, and I wanted them to have a positive appreciation for exercising their rights.”

Xander Persson, a 8-year-old Shawnee resident, said he came to the protest with his parents and 5-year-old sister, Summer, to show that “Black Lives Matter.”

“I want black people to have the same rights as white people,” Persson said.

Persson’s parents, Eric and Jessica, said they have brought their children to protests the past few years as a way to set an example.

The protest brought parents from across the metro area. The Preston family from Independence joined as well.

Heather Preston, who is white, said she brought her two daughters to the protest so they can learn that their life matters. Their father, Brandon Preston, is black, and she worries about their children’s future dealing with racism.

Eleanore Preston, who is 4 years old, said she and her 3-year-old sister, Isabelle, held up their own signs to show a simple message.