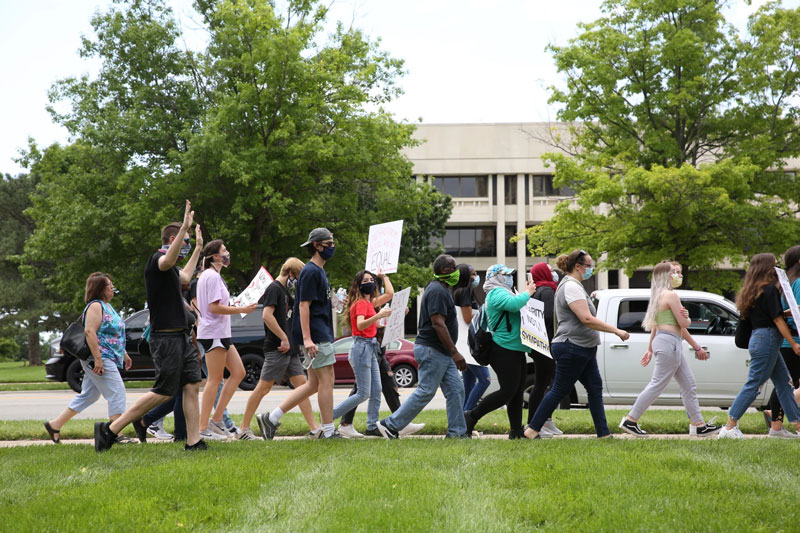 People protest the death of George Floyd in front of the Kansas Capitol in Topeka on May 30, 2020. Photo credit Nomin Ujiyediin/Kansas News Service.

As demonstrations against police brutality and racism have rocked the world, some Kansans have protested in hopes of pushing reforms at home.

Since Memorial Day, thousands of people have attended rallies and marches across the state, from Garden City to Kansas City, protesting the deaths of George Floyd and other black people at the hands of the police.

And like many other communities in the U.S., Kansas activists and law enforcement are taking another look at policing in their communities.

“You can have all kinds of policies and have all kinds of procedures that you’re supposed to follow,” said Lorenza Lockett, a professor of social work at Kansas State University and a co-chair of the Manhattan-Riley County Coalition for Equal Justice. “But what are you actually following? And particularly when it comes to a minority population, most specifically, African Americans.”

For years, Lockett said, some Manhattan residents have felt unfairly targeted by police. Many complaints have come from African Americans and people who live south of Poyntz Avenue, in a neighborhood populated with many people of color.

After a 2014 study found that black Manhattan residents were about seven times more likely to be arrested for possession of marijuana than white people in the city, the group started criticizing racial bias and use of force at the Riley County Police Department. That department patrols Manhattan and the surrounding area.

The group has pushed for training to reduce racial bias, and for the hiring of more black officers. Jonalu Johnstone, a Unitarian Universalist minister and co-chair of the group, said it also wants to work with the county’s Law Board that oversees the police department.

“We have a lot more people suddenly interested in this,” Johnstone said, “after we’ve been banging away at it for some years.”

“I do my very best to try to look into their concerns and then give them an answer. I do believe it happens,” he said. “It’s very, very difficult to prove.”

Officers are sent to places where crime reports are highest — and he said those tend to be minority neighborhoods. The department keeps detailed records of every use of force by its officers.

“I haven’t had anybody come to me directly and say, ‘You guys are heavy-handed,’’ or ‘spend way too much time down here targeting African Americans,’” Butler said. “We are a heavily data-driven department.”

The record-keeping helped the department become accredited by the Commission on Accreditation for Law Enforcement Agencies, a privately run nonprofit founded by law enforcement organizations. The distinction, Butler argued, shows the department is getting things right.

“I wish every department in this country were accredited,” Butler said. “You would see a lot less of what is concerning Americans and other law enforcement professionals.”

The department is trying to hire more racially diverse officers, but it struggles to find them during a nationwide shortage of candidates for police jobs. And the coronavirus pandemic, he said, has delayed long-planned meetings of a task force intended to address impartial policing.

Police departments in Kansas are required to adopt a written policy on racial and other types of bias. Each department submits an annual report to the state attorney general’s office detailing bias complaints. The attorney general’s office reviews complaints. If they’re found to be substantive, it submits them to the Commission on Peace Officers’ Standards and Training, the state office that certifies police.

Lessons about prejudice are woven into all parts of the curriculum, said Darin Beck, director of the Kansas Law Enforcement Training Center in Hutchinson. The center trains about 70% of law enforcement officers in the state, while the rest undergo training at local departments, which can require even more hours.

“It’s just hard to answer how much training we have,” Beck said. “The fair and impartial policing class is probably the largest area of the curriculum all together in one place that talks about discrimination.”

The center added training on bias in policing about 15 years ago, when it first became a trend in the U.S. The center plans to introduce more training on the topic later this summer. That’s not in response to the protests, Beck said, but as a part of ongoing updates to the curriculum.

“Accountability is really critical for us here,” Shockey said. “Community relations is really important for us.”

Activists have been working on local police reform for years, making the most progress by working with the Wyandotte County government. An important tactic for activists, Shockey said, is to know where to take the fight — and to keep it local.

“There has to be good grassroots organization and pressure put on cities and mayors and police chiefs,” he said, “to make some of the changes that are necessary.”

People seeking reform in their communities also need to have specific goals in mind, Shockey said, such as which desired results could come out of bias and de-escalation training.

“If you don’t have some concrete asks,” he said, “then you end up with lip service and no real solutions.”