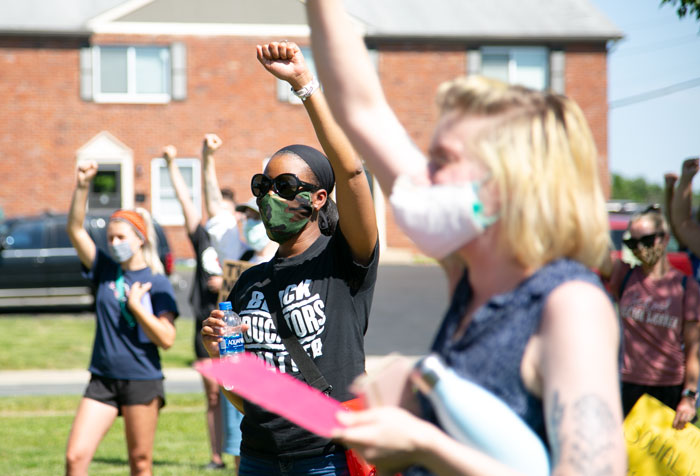 Educators and families marched and protested near Westridge Middle School at 95th Street and Nieman Place following the killing of George Floyd.

While protests, marches and rallies calling for racial equality and the end of police brutality continuing across the country following the killing of George Floyd, dozens of local educators silently marched and protested for social justice on Friday.

Organizer Janet Carter, who teaches Spanish at Shawnee Mission West, said that as both a black woman and an educator she was strongly impacted by Floyd’s death. As educators play a significant role in youth development, Carter said, they have a special opportunity to influence the way students view themselves and others. Racism is taught, she said, but “anti-racist views can be taught as well.

Carter said it was important for educators to make a statement that they recognize how systemic oppression and lack of diversity plays into the structural institution of education. As Shawnee Mission has recently issued statements acknowledging its own faults and gaps, Carter said she and fellow educators want to partner with the district on these issues.

“Not only do we recognize and acknowledge it, but we’re also willing to stand up and help change it, to be part of the change and to help the district in moving toward more equity for all students” Carter said.

Bates provided a historical background on police departments, which originated from slave patrols, he said. The recent and past injustices are merely a result of police departments upholding ideals of a constitution that did not include black and brown people, he said.

Two participants and local educators Angie Powers and Clayton Kistner marched up and down 95th Street, across from Oak Park Mall, long after others found shady hideaways. Kistner said it’s important for white educators like themselves to engage in difficult conversations.

“I think it’s very easy for Johnson County teachers to try and, like, write off that we don’t need to be talking about race because this is such a white flight county,” Kistner said. “Realistically, these conversations are important because the people who grow up to enact systemic racism are people who are coming from white communities like Johnson County.”

The pair work together, and are actively analyzing and diversifying their resources, Powers said.

“It’s just really important that educators become more educated themselves, specifically about the Black Lives Matter movement — not only to be better educators, but specifically to be prepared for this upcoming school year,” Powers said.