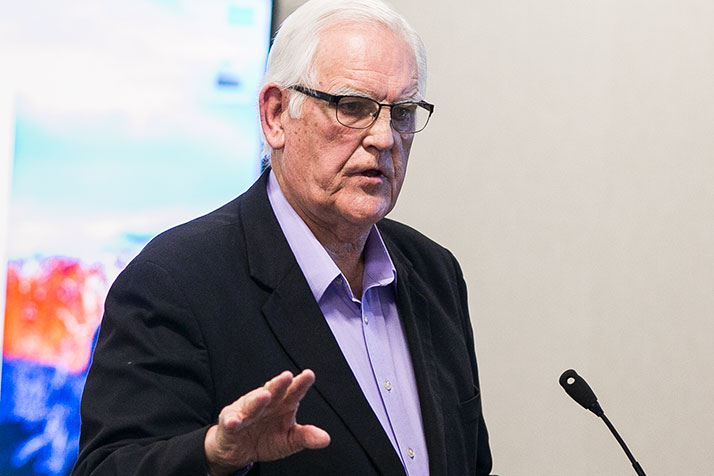 “Hopefully some of these elements will not be needed, but if they are and we haven’t taken the action to be prepared, then we will have fallen way, way short of our responsibility,” said County Chair Ed Eilert. File photo.

After many reassurances about data privacy and government oversight, the Johnson County Commission approved a $4.1 million expansion of its public health department budget to pay for contact tracing, testing supplies and more epidemiology staff.

Some commissioners, who said they were leery of certain aspects of the health department’s request, also asked for and received a pledge that the increased research on the spread of COVID-19 would be fact-based and apolitical.

Officials said this year’s extra spending should be eligible for federal reimbursement under the Coronavirus Aid, Relief and Economic Security (CARES) Act. After this year, the commission will review ongoing expenses for future budgets.

The approval will give the health department up to 5 new full-time employees for case investigating, 3.75 full-time equivalents for contact tracing and 6 to beef up the epidemiology staff, which health director Sanmi Areola, PhD, described as “scrambling” to keep up with its workload. The epidemiologists would continue to work on other outbreaks and health data after the COVID crisis is over, but the investigators and contact tracers would be part-time and kept on an as-needed basis, he said.

The money also would pay for more training and technology to support the work and up to 50,000 tests.

The request was approved only after repeated questions about the security of the data contact tracers will collect. Commissioner Mike Brown said he’s been asked about how and where the information will be stored, who has access to it and whether residents will be required to cooperate with health investigators.

Contact tracing has been identified as a key component for limiting the spread of the coronavirus as businesses, schools and events start to open back up. A contact tracer is someone who delivers the news of a positive test and then tries to reach that person’s contacts to ask them to quarantine themselves.

But contact tracing has become the object of conspiracy theories of late, with social media posts popping up threatening the safety of the investigators.

It was evident that some of that thinking has reached Johnson County. During the meeting, as Areola spoke, a woman in the hallway outside the board hearing room could briefly be seen holding a sign up to the window behind him. The sign, which appeared to be professionally printed, said, “Contact tracing = Big Brother” and carried the dates 2020 and 1984 an apparent reference to the dystopian novel 1984 by George Orwell.

Areola told commissioners that names and other identifying information are removed from the data for analysis, but the raw data stays with the state health department for 11-20 years. Answering questions from a contact tracer is voluntary and confidential by state law.

Commissioners Becky Fast and Janeé Hanzlick said the county needs a robust public health department to avoid the kind of blanket stay-at-home orders imposed at the beginning of the pandemic. Fast compared it to a “powder keg.”

“If you don’t get on top of it the powder keg blows up and it impacts having a healthy economy and healthy workforce,” she said.

Chairman Ed Eilert warned that county officials could come to regret not taking appropriate action on the virus. “Hopefully some of these elements will not be needed, but if they are and we haven’t taken the action to be prepared, then we will have fallen way, way short of our responsibility,” he said.

The commission took two votes on the matter. The addition of six epidemiologists was okayed 5-2, with Commissioner Michael Ashcraft and Brown voting no. A vote on the rest of the spending passed unanimously.