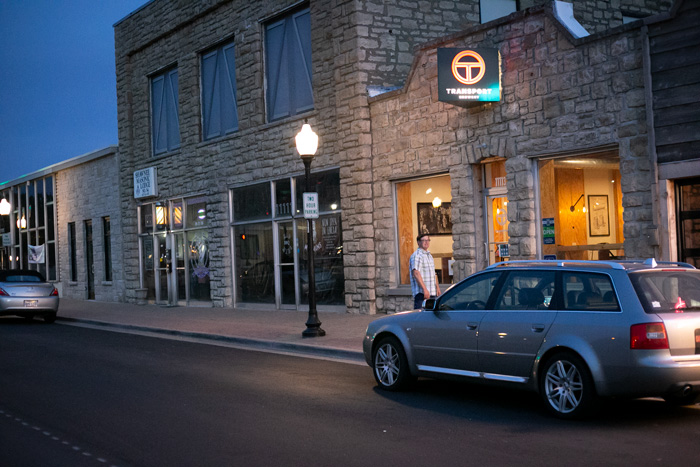 The Shawnee council is allowing temporary parklets for restaurants and bars downtown to utilize during the COVID-19 pandemic. Parklets are elevated decks, flush with the curb, that will be located in the parallel parking spaces along Johnson Drive. Above, Mike McVey in front of his business, Transport Brewery. File photo.

Shawnee will consider allowing restaurants and bars to have temporary outdoor seating along Johnson Drive downtown.

To accommodate downtown businesses during the COVID-19 pandemic, Shawnee city staff on Monday proposed a plan similar to what Leawood now offers for the food and drink service industry: Extended outdoor seating. Shawnee’s plan would include parklets.

The parklets must also follow social distancing guidelines and have hard, reflective barriers to protect people on the parklet from traffic.

If approved, construction of parklets could begin in late June or early July. The temporary parklets would expire Nov. 1.

Participating businesses could have access to $1,000 to cover costs to build and maintain their own parklets. City staff recommend spending no more than $5,000 out of the $15,000 budgeted annually for downtown events, a portion of which will not be used this year due to the pandemic. Restaurants and drinking establishments downtown include:

Restaurants and bars are required to ensure 6 feet of separation between tables and must not allow guests to congregate in waiting and bar areas, according to a city memo.

Shawnee city councilmembers shared their support for exploring the concept. Some councilmembers proposed extending the parklet idea beyond November if it’s successful.

“Thanks for the innovative thinking on this and bringing it to our attention,” said Councilmember Lindsey Constance. “I think it’s a really great example of something somewhat relatively simple and low-cost that the city can do to support our businesses, so thank you and keep it up.”

Mike McVey, one of the owners of Transport Brewery across the street from city hall, attended the meeting to learn more about the parklets. Afterward, he noted that he and the other owners are interested in exploring the idea and gathering information on the costs to build a parklet.

“When the idea came up, we had never heard of anything called a parklet, although we’ve all been to districts where they had similar things,” McVey said. “Never thought about putting a portable deck on the parking space in front of us.”

McVey said he is primarily concerned that the parklet will be cost prohibitive because it’s a temporary setup — especially because not many people will be able to use it because of the space required for social distancing. Regardless, the primary value McVey sees in it is the visibility and placemaking it provides for downtown Shawnee, as passersby see customers enjoying themselves outdoors. He appreciates the city’s support for coming up with a plan.

“Until we know the cost, we have no idea, because if it costs $15,000 to build this thing that we might use till November and then trash, it’s probably not very valuable to us,” he said.

City staff will present a formal ordinance for review June 22.