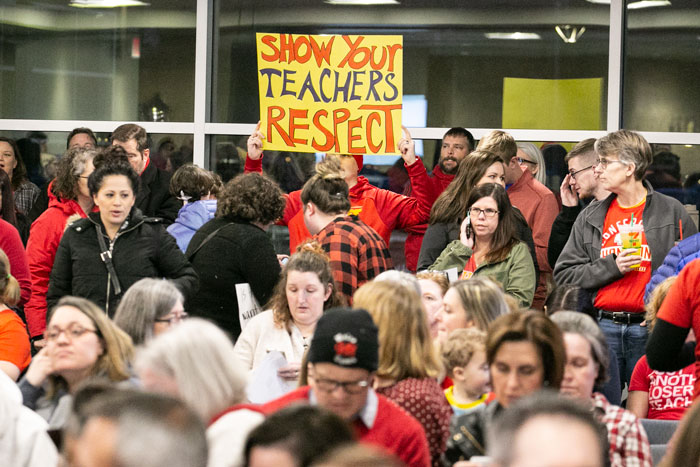 Teachers and supporters packed the board room at the Center for Academic Achievement in February in the midst of this year's contentious contract negotiations process. The board is considering a series of moves that would free up revenue to hire more teachers and reduce workload. But it would require a property tax increase that must be approved by voters.

The Shawnee Mission Board of Education will need to decide by next month whether to put a new bond issue before area voters this fall — a move that, if approved, would allow the reallocation of some expenses and open up funding to hire dozens of additional secondary teachers, a key step to addressing the workload issues that dominated this year’s contentious contract negotiations.

But the move may require a tax increase for district patrons, and wouldn’t lead to substantial workload reductions for a couple of years.

Superintendent Mike Fulton on Monday presented the board with the results of a study by the group tasked with addressing the strategic plan goals of reducing secondary teachers’ daily class load from six sections to five, as is standard in neighboring districts.

To make those new personnel expenditures possible, Fulton’s administration has suggested moving $4.5 million in custodial/maintenance expenses out of the district’s operating budget — where teacher salaries are drawn from — and into its capital outlay budget over the coming two years. This move is permitted under Kansas law, but would require the injection of additional funding into the capital outlay pool that could only be generated from local property taxes.

“It’s critical that if this is going to work, because of the impact on capital outlay, that we pass a bond issue this coming year,” Fulton said. “And keep passing bond issues in subsequent years to make sure we don’t put too much stress on capital outlay.”

Fulton put two possible scenarios in front of the board for a bond issue next year that would need to be approved by district voters this fall. One would have the district gradually increase its local property tax rate to 55.955 mills from the current 52.11. The other would increase it to 55.932 mills. The first option would not require a mill levy increase in the short term. The second option would. Even with the increase, however, Shawnee Mission’s local option budget property tax rate would be significantly lower than its peers in Johnson County. Here’s a look at the current property tax rates for Johnson County school districts:

In response to a question from Boardmember Jamie Borgman, Chief Financial Officer Russell Knapp said that the proposal on the table that would require a mill levy increase next year would amount to an out-of-pocket increase of about $44 per year for every $100,000 of appraised home value. (So, for the owner of a $250,000 home, taxes would increase approximately $110 per year).

The increased revenues from either of the proposed mill rate hikes wouldn’t come close to solving the district’s budget puzzle, though. Even with the increased funding in the capital outlay budget, the district will be facing difficult questions about how much and where to allocate resources to update aging facilities.

Complicating matters further is the fact that the increases to K-12 funding approved by the legislature last year following the Kansas Supreme Court’s ruling that the state’s spending plan met constitutional requirements may be subject to change as the state confronts the revenue shortfalls caused by the pandemic closedowns.

The board instructed the administration to move forward with a survey of district patrons in the coming weeks to gauge sentiment on the idea of a property tax increase. The board will take that input into account at its July 27 board meeting when it decides whether or not to put the bond issue measure on the November ballot.