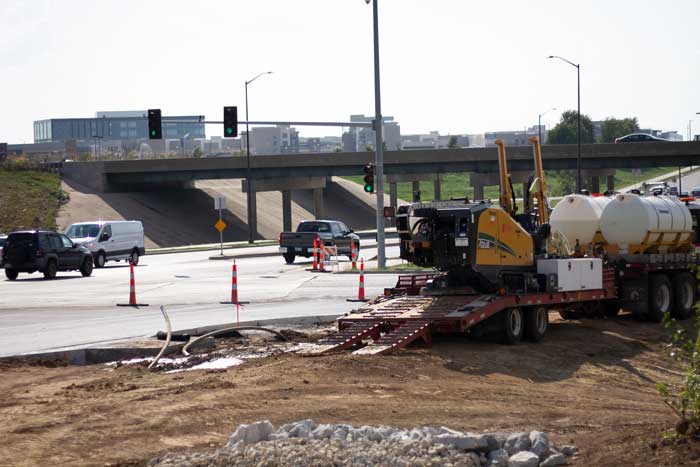 Lenexa and KDOT are teaming up to make road improvements at the interchange of I-435 and West 87th Street Parkway. File photo.

The Lenexa city council on June 2 agreed to acquire private property for a project to add lanes and make other public improvements at the Interstate 435 interchange along 87th Street Parkway.

The project includes construction of additional traffic lanes, mill and overlay, modifications to the storm sewer and street lighting systems, relocating the trail, replacing the traffic signal and utility work.

To complete the project, city staff noted that Lenexa must acquire lands along the project area at 87th Street Parkway and I-435. The ordinance authorizes the city’s property acquisition counsel to file a condemnation petition with the district court to acquire the easements and rights-of-way for the project, according to a city memo.

The Lenexa council voted 7-0 to acquire the land by condemnation for the project area. There was no council discussion or public comment. Councilmember Mandy Stuke was absent.

In January, the city council authorized staff to begin the acquisition process. The project requires acquisition from five tracts, and all five will be condemned as part of the process, according to the memo. Staff noted that Lenexa sent out purchase offers on April 1 but was unable to acquire any property due in part to the pandemic.

City staff said the condemnation proceedings will not affect the project timeline. The project is slated to begin in winter 2021.