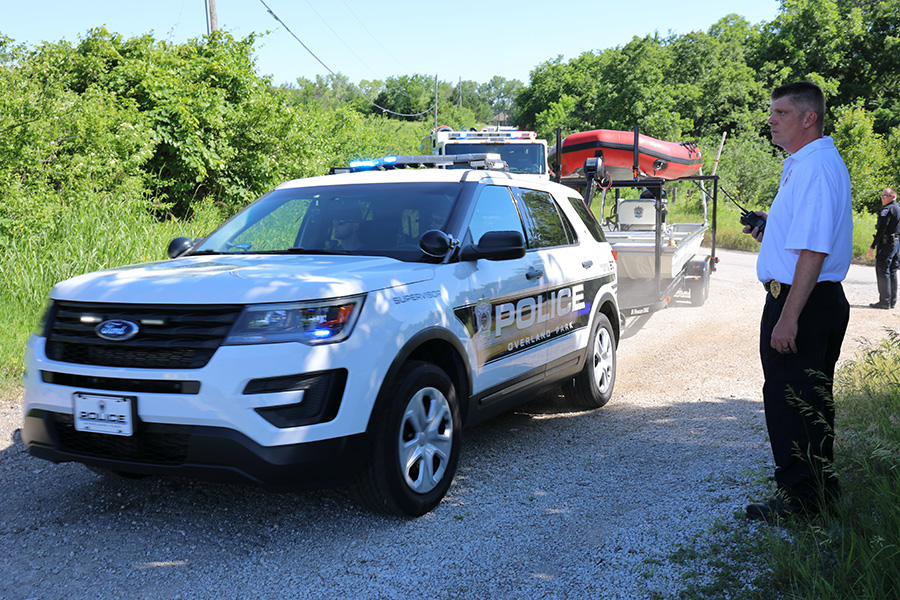 The Overland Park Water Rescue Unit aided Shawnee authorities in the search for the 20-year-old who disappeared into a pond Sunday afternoon. Photo credit Mike Frizzell.

A 20-year-old man is dead after disappearing underwater while fishing and swimming with friends in a Shawnee pond on Sunday afternoon.

Shawnee Fire Marshal Corey Sands says firefighters were called about 3:20 p.m. to the pond in the 6300 block of Lind Road. The mostly wooded property sits at the northwest corner of Shawnee Mission Parkway and I-435.

“Three witnesses said that he was in the water, then they couldn’t see him anymore,” Sand said. “The pond is about 12 feet deep.”

Rescue crews from the Shawnee Fire Department searched the pond from two rescue boats but were unable to locate the man.

Several family members and the landowner waited near the entrance to the property with the Shawnee Fire Department’s Chaplain as firefighters and divers searched the pond, about a quarter-mile away.

As of this report, the Shawnee Police Department is handling the investigation and has not released any additional information.

The man’s identity has not been released.

Fire Marshal Sands said the Major Baker with Shawnee PD would be sending out a news release “at some point on Monday,” with more details.