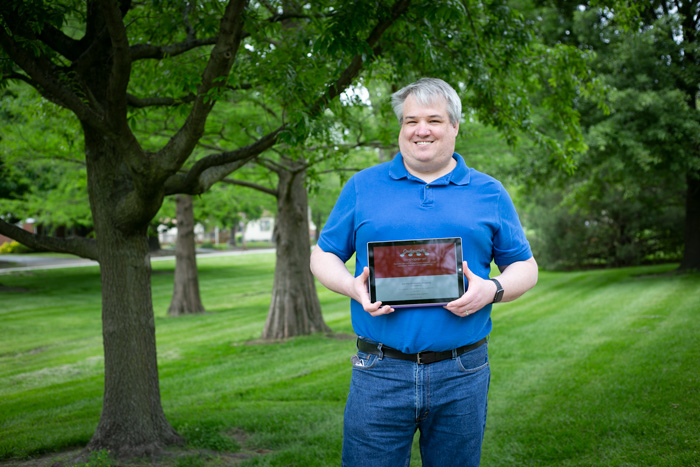 During the COVID-19 pandemic, we’re shifting our Shawnee Mission Faces to focus on folks in roles that have been profoundly effected by the virus and response: What life is like now with social distancing, a stay-at-home mandate and the need for essential workers.

A self-taught software engineer, Jason (Roe) Wadsworth was challenged by a former colleague to come up with a solution to fix the crowding issues in stores during the COVID-19 pandemic. He now spends nights and weekends writing an app that functions as a shopping cooperative — the app, Coshoperari, pairs up users who need groceries or other goods with users who can shop for them at the store. A 1991 SM West graduate, he now serves as vice president of engineering at MobileUp Software. When he’s not working or dabbling with other software engineering projects, he enjoys long drives on back roads with his wife, Joni Wadsworth. They live in Overland Park with one of their four children.

All of a sudden, we’re working from home, we’re trying to find ways to be socially distant while still doing the things that we have to do like shopping, getting an oil change, for example, just things you never really thought about before that you have to treat differently now.

So as a part of that, a former colleague of mine that I’ve stayed in touch with, he asked me and one other guy, hey what do you guys think about trying to brainstorm on something that we can do that may keep us busy in this kind of weird what-do-we-do time but also that can help?

So I did a little bit of brainstorming internally before we had a video conference where we got together and talked about it. And I had this idea.

You think about how often you go to the store to just get the one or two things that you forgot or you ran out of or whatever it is, or maybe it’s hey I want something from the hardware store or maybe it’s hey, somebody is going to get something at a restaurant, whatever it is. Maybe there’d be a way for us to work together to help support that without having to have a whole bunch of people out.

So I came up with this idea — right now it’s primarily around groceries and we’ll grow past that but — to where if I need a couple things, maybe somebody in my neighborhood is going out, going to the grocery store to do their big shopping and while they’re out, maybe they can pick them up for me.

You go to the store, you pick it up, it connects you two together, and now you guys are working together to figure out OK how are we going to pay for whatever, that’s up to you, kind of like Craigslist.

The point is to connect people, to give you the opportunity to work together to help reduce the number of people who are out shopping.

The biggest thing that I’m hoping to accomplish is just cutting down the number of people who are out and about for small things. From a COVID-19 specific perspective, obviously, the fewer people that are in the stores, the less chance there is of spreading the disease around.

The interesting thing about this is I was thinking of beyond that, the environmental impact of it as well. How often do you drive to the store, and you drive your car that’s producing carbon monoxide and all these other things, just to get milk? And if somebody else is already going, could you take advantage of that and maybe reduce that a little bit?

And on top of that, we live together in a fairly dense world today, and yet nobody knows each other because everyone does their own thing. So one of the things that would be nice is for people to actually know who their neighbors are.

You think of the more densely populated areas, apartments, stuff like that, it’s especially true, but even neighbors when you have a house that’s two doors down and you might not even have met them. This might be a way to facilitate people starting to talk to each other a little bit.

It’s the type of thing where when you start seeing something, you become passionate about it. You’re willing to spend that extra time and energy on it. So it’s actually been kind of a good escape for me in the middle of this.

It’s giving me something to take my mind off the constant news stories about the same thing every day, the number of people that are dying. There are sad and tragic things, and it starts becoming overwhelming. To some degree, it’s been a relief from that, and yet somehow tied to it in the same way, I don’t know how to describe it.

I don’t know if dichotomy is the right word, but it’s like this mix of I’m running into it yet escaping it at the same time. It definitely gives me a degree of purpose in the midst of this. I’m not going to make money off of this in the short term, but if it adds value to the world, then I’m OK with whatever that is.