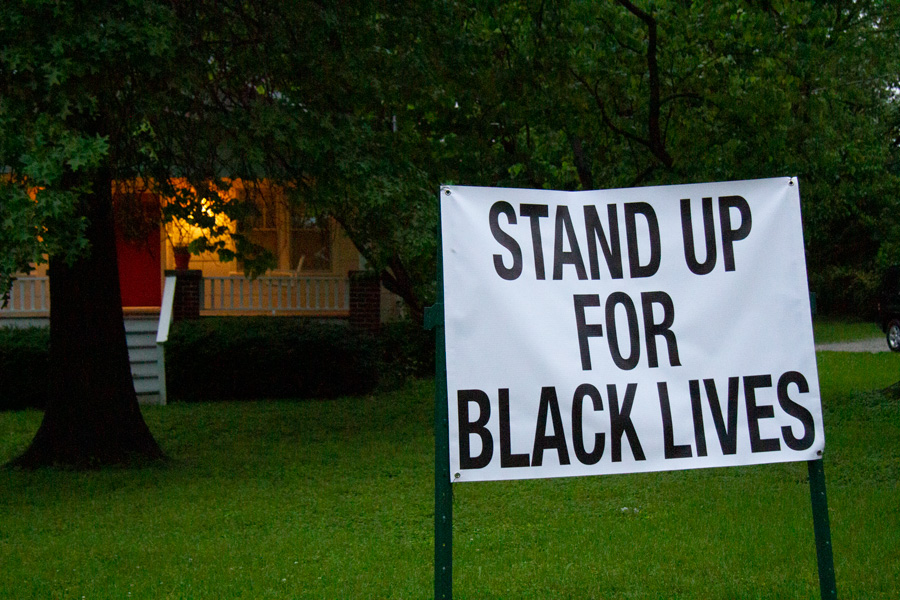 A sign in a yard facing Mission Road in Prairie Village. County Commissioner Janeé Hanzlick told her peers on the board this week that Johnson County needs to do a better job acknowledging the racism in its past.

Johnson County leadership needs to do more to acknowledge the racism in the county’s past and to seek out ways to change, Commissioner Janeé Hanzlick said Thursday.

Hanzlick was joined by Commissioner Becky Fast in remarks at the end of the commission meeting calling for county leaders to be more active in reaching out to communities of color on how the county’s interactions with them could be improved.

The remarks came just an hour before the memorial services for George Floyd were set to begin in Minneapolis. Floyd’s death at police hands set off protests around the world.

“As much as we’d like to we can’t deny that Johnson County has benefitted from historic racial injustice and continues to do so,” she said. “The question now is how do we take this tragic but historic opportunity to move Johnson County forward?”

She asked community leaders to talk to diverse groups to find where the county is failing and where it can change.

A few minutes later Fast seconded that, noting that the coronavirus has disproportionately affected people of color. At times tearful, Fast said that in Roeland Park, where she used to be a city council member, she worked to get rid of discriminatory language that denied African Americans the right to own a home in certain parts of town.  The covenants are now unenforceable because of a U.S. Supreme Court decision, but many remain on the books.

“We must change this. We must do more for our black community and our black residents and our people of color,” she said. “We must remember that the struggle isn’t against one another it is on behalf of one another.”

Other commissioners did not comment during the remarks, which came at a time when they could speak on non-agenda items. Chairman Ed Eilert said the sheriff and city police departments have had conversations with minority groups about policing policies. He pointed listeners to the city and county websites for more information.

Hanzlick said later she was disappointed in the statement sent out June 2 that pledged to uphold civil rights for all but also urged citizens not to resort to the type of violent protests that have happened in some other cities.

That statement, signed by Eilert, Sheriff Calvin Hayden and District Attorney Steve Howe, did not invite dialogue or commit to examine law enforcement training and policies, she said. She said she asked to add wording to that effect but was overruled.

But Hanzlick said the fact that the county has escaped protest does not mean it’s off the hook on racial issues. “People need to recognize our county is in many ways built on racism.”

“Every day black people in Johnson County have to live with the assumption they don’t belong here,” she said.

Hanzlick, whose husband is a historian, said the county has a “hidden and shameful” history of racial injustice. In fact the county was named for the Rev. Thomas Johnson, who was a slaveholder, she said. Her remarks were not a call to rename the county, however.

The restrictive housing covenants and redlining have discriminated against Jews and others as well, she said.

“This needed to be said and the county wasn’t going to say it in its official capacity. I felt our community deserved a stronger statement,” Hanzlick said.