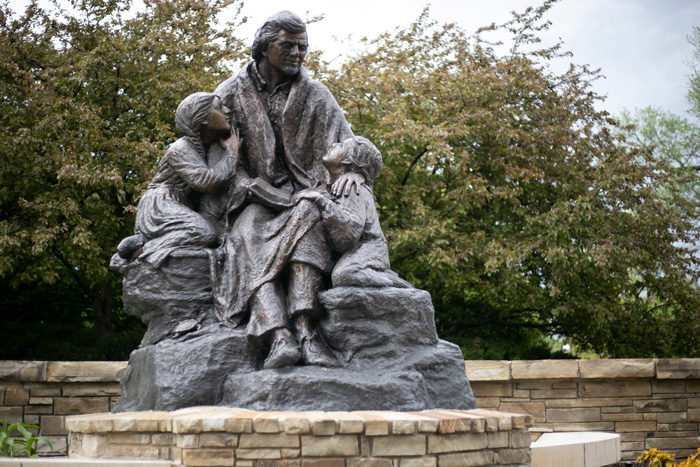 In a presentation to the Shawnee council on Tuesday, city staff discussed the impacts of COVID-19 on the city's budget and services. Above, "Taking Time," a sculpture of Chief Charles Bluejacket and his children at Herman Laird Park.

Shawnee city staff and leaders considered ways to to reduce expenses while continuing to provide services for the community, during a council discussion on how the budget could be affected by a potential second wave of COVD-19.

In a presentation to the city council on the upcoming budget, city management and department heads discussed the impact of COVID-19 on city services as well as ways the city has significantly reduced expenses to accommodate the loss in revenue.

City staff anticipate a roughly $8 million drop in tax revenues and other miscellaneous revenues in the general fund this year, from about $55.6 million to roughly $47.9 million, especially with the possibility of a second wave of the COVID-19 pandemic later this year. City staff expect revenues to increase again next year.

Staff noted that anticipated revenues and expenditures for the drafted budget are not final, and some adjustments may be made later this month before the budget is finalized.

Caitlin Gard, assistant city manager, said reductions in expenditures in the general fund are primarily an impact of the COVID-19 pandemic. These reductions mostly come from the following areas:

In total, the city proposes saving roughly $4.4 million in expenditures out of the general fund, from about $57.9 million to $53.5 million.

“Some of the departments had to make some really hard decisions, and I’m really proud of everybody that’s going to be on the call today and all of our department heads at coming up with a budget that supports our staff and the programs that we provide to our community, to continue to provide those services at the highest level while also coming up with some expenditure reductions,” Gard said.

The city’s convention and tourism fund will also take a hit, as hotels had significant cuts to guests. The loss in hotel occupancy tax revenues amounts to about $280,000 — about half of what the city had budgeted for 2020. This fund supports things like Old Shawnee Days, which was canceled this year, so those funds earmarked for this year will be used for next year, Gard noted.

The equipment and facility reserve fund was the “hardest hit” for the city, Gard said. This fund receives a $2.3 million transfer from the general fund to support motor vehicles and equipment for public works and parks and recreation as well as information technology operations equipment and facility improvements. Gard said city staff “made the hard decision” to completely eliminate this transfer for next year, but the city may need to resume this transfer in 2022.

Citing health officials’ predictions of a second wave of the COVID-19 pandemic in fall and winter 2020, city staff anticipate a 41% fund balance in 2021, down from the city’s 47% fund balance at the end of 2019.

Nonetheless, while the city is spending into its reserves, Don Cawby, the city’s finance director, said the city plans to grow its fund balance from nearly $20 million at the end of this year to $22.5 million next year, mostly in anti.

Shawnee anticipates receiving roughly $1.5 million next year in sales tax revenues from the new Johnson County Courthouse in Olathe. The city has already planned to direct $500,000 of those funds to the city’s reserves, but the remaining $1 million can be used for other city projects. Multiple councilmembers suggested using remaining funds to restore stormwater infrastructure or other street safety issues like repairing bridges or streetlights.