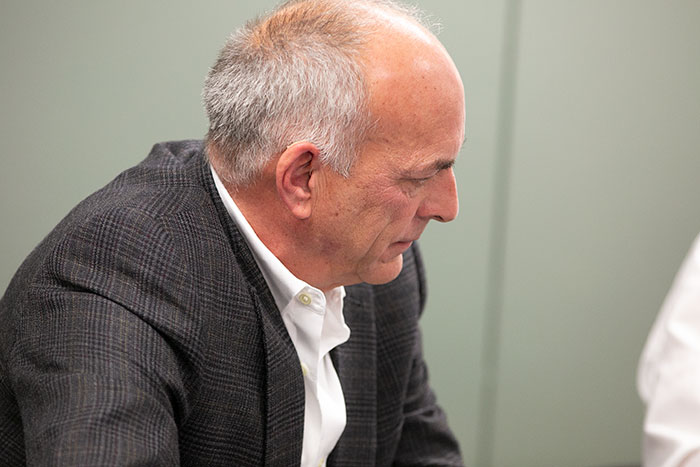 Johnson County Commissioner Steve Klika suggested reorganizing the county's aging services at Thursday's Board of County Commissioners meeting. “This whole COVID deal has opened up a whole can of issues,” Klika said. “We need an organization specifically geared to the most vulnerable population. It’s time to elevate this issue.” File photo.

An aging population vulnerable to the most severe effects of COVID-19 has prompted Johnson County Commissioner Steve Klika to suggest a massive reorganization of the county’s aging services.

Klika asked, and the rest of the commissioner agreed, for staff to look into the idea of a new county department that would place aging services under one umbrella. That would include housing services, nutrition services like Meals on Wheels, outreach and accessibility services, Community Development Block Grants and perhaps the code enforcement at senior facilities that is currently done by the state.

“This whole COVID deal has opened up a whole can of issues,” Klika said. “We need an organization specifically geared to the most vulnerable population. It’s time to elevate this issue.”

Klika said he is concerned that the needs of the fastest-growing demographic in the county are being well met. As the Baby Boom generation enters retirement years, the county’s population has become weighted on the older edge of the spectrum. About three fourths of the county was under 45 three decades ago, but that number shrank to 64 percent in 2008, according to county figures. In ten years, it’s projected that close to one in four county residents will be 60 or over.

Klika hopes the new department will address some of the needs recently identified by the county Council on Aging, an advisory group. Those needs include increased capacity for nutrition services and a new kitchen for Meals on Wheels, plus increased mental health counseling, transportation, in-home supports and generally more accessibility and awareness of services.

Commissioner Janee Hanzlick said Klika’s plan was a step toward exploring how aging services can be improved. There might be benefits to a centralized department that can act as a clearinghouse and a communications link with the state, she said.

Commissioner Michael Ashcraft expressed reservations, though, at the possible creation of a new department.

“You are talking about a new bureaucracy with a new department head and that troubles me,” Ashcraft said.

Instead he suggested the county staff should look at whether the existing department structure can be made more efficient.

Klika said he would like to start investigating, either way. “I’m not advocating another monster here,” he said of a new bureaucracy, adding that parts of some other departments could end up being combined and streamlined.

The commission ultimately voted unanimously to ask the staff to look into it and discuss the findings in another three months. Klika said he was grateful that commissioners could put aside their differences.

“This signals to the general population that while we’re trying to deal with the immediate crisis (of the pandemic) we’re not going to let down our vulnerable population,” he said.