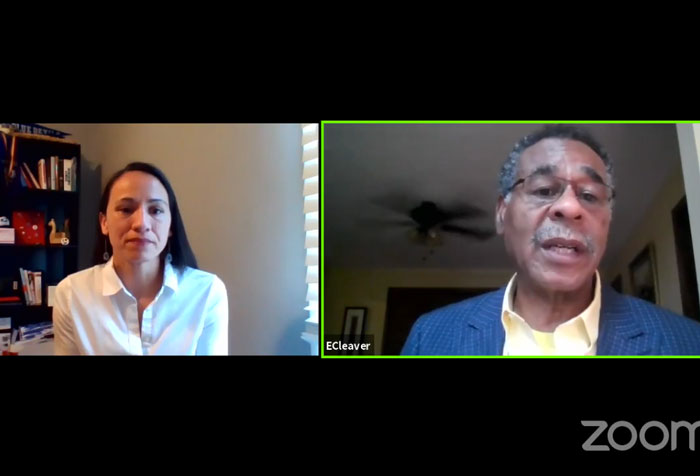 A year after U.S. Rep. Emmanuel Cleaver II was sworn in as Kansas City, Missouri’s first black mayor, he recalls waking up to news that four Los Angeles police officers were found not guilty of beating Rodney King. Much like then, Cleaver said the country has come face to face with the reality it’s been on the edge of racial conflict for the past 300 years.

As nationwide protests over the killing of George Floyd entered the tenth day, U.S. Rep. Sharice Davids hosted a race, equity and justice discussion with Cleaver on Facebook live Thursday. Cleaver said the kneeling and choking that killed Floyd should be prohibited in training manuals, but it’s part of a 300-year-old tradition of inflicting harm on African Americans that dates back to slavery.

“There was this thing in slavery that unconsciously moved all through centuries, that African Americans did not experience pain like others, that there was some human characteristics possessed by people of color that prevent them from suffering like others,” Cleaver said. “People felt like ‘I can do this to African Americans, it’s not going to hurt him or her as badly.’”

With the coronavirus pandemic and its corresponding impacts looming, Cleaver said the country has reached a “confluence of bad stuff” like never before. While some of those issues like unemployment and financial struggles can be mitigated through legislation, the country cannot “legislate [racism] away,” he said.

The outrage created by Floyd’s death is pain from “that old boogeyman called race” Cleaver said, which has regularly haunted black people since 1865. Although the country is in a “bad spot right now” Cleaver said there are signs of a movement toward change. As he spoke to a crowd of Country Club Plaza protesters last weekend, he said he was brought to tears to see, for the first time in his life, a majority of the protesters were white.

Below is a video recorded by Davids of the conversation, followed by a time code of Cleaver’s main topics throughout the discussion.