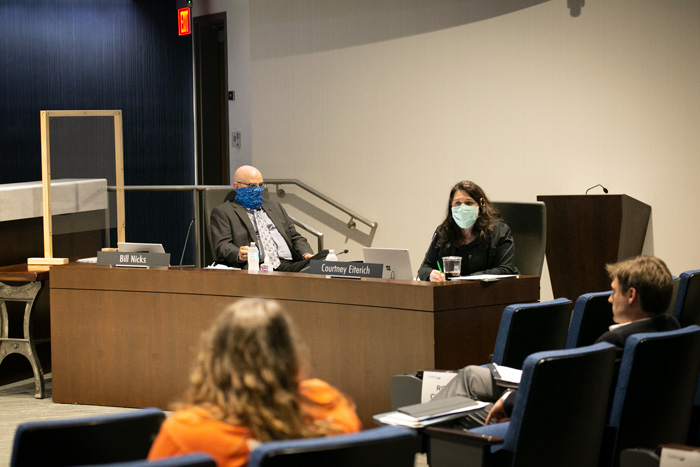 In its first in person meeting since the COVID-19 shutdowns began mid-March, the Lenexa city council Tuesday focused much of its discussion on how the pandemic has affected city hall operations and parks and recreation programming.

The council also discussed the police department’s response to the nationwide protests against police brutality following the death of George Floyd.

Councilmembers were spaced apart on the dais, while city staff and members of the public spread out across the auditorium. Hand sanitizing stations were posted near entrances, and every other row was marked as closed to encourage attendees to spread out. Most people wore masks.

Chief Tom Hongslo gave some remarks on the police department’s response to several inquiries from residents about Lenexa’s approach toward use of force.

Several councilmembers thanked Hongslo and the police department for their work, including the department’s recent workshop for the public to learn about how on use of force.

“It speaks volumes, and it really shows the leadership,” said Councilmember Joe Karlin. “It also shows our officers that we care about them.”

Councilmember Courtney Eiterich said she’s been on the phone with many people to discuss concerns about use of force and Lenexa’s police response, especially as it pertains to the national conversation.

“It’s been really stressful and really emotional and really raw for a lot of people, and I just wanted to acknowledge the efforts that have gone into what we do as a city and how we want to maintain a safe place and a welcoming place for people of color and who want to live and work and visit our city, and look forward to some continued dialogue about what that looks like for the future,” Eiterich said.

In response to residents’ inquiries about the Lenexa Police Department’s response to the George Floyd protests in Kansas City, Missouri over the past few days, Hongslo said Lenexa officers stayed in the city but gave some supplies to police forces that did respond. He noted that some Overland Park and Olathe police officers as well as the Johnson County Sheriff’s Office assisted on the Country Club Plaza.

“If this does spill over into our city or we start seeing some activity that we don’t like, we can switch that schedule very quickly and we’ll have lots of manpower in this city,” Hongslo said, citing the shifted schedule to accommodate social distancing within the department.

Acknowledging the economic and health uncertainties brought on by the pandemic, councilmembers also thanked Doug Robinson, chief financial officer, for his leadership with the budget, especially in keeping high reserves for Lenexa to weather uncertain economic conditions like the pandemic.

Finally, Logan Wagler, deputy director of parks and recreation, led discussions on the changes to recreational programming. City staff have limited reopening of the city’s recreational facilities and programs per guidance from the state’s Ad Astra reopening plan. The department’s plans are on the city’s website.

Councilmembers also thanked Wagler and recreation staff for working to provide a safe and fun summer — especially by planning to open the Indian Trails Aquatic Center.

“I just want to say thank you on behalf of all the moms, because that’s a particular group who I think has been pushed to the limit during this,” said Councilmember Julie Sayers. “And everyone that I’ve shared this information with so far this week has just about broken rank and hugged me. I think just having some alternate things to do with the kids is going to be really, really positive.”