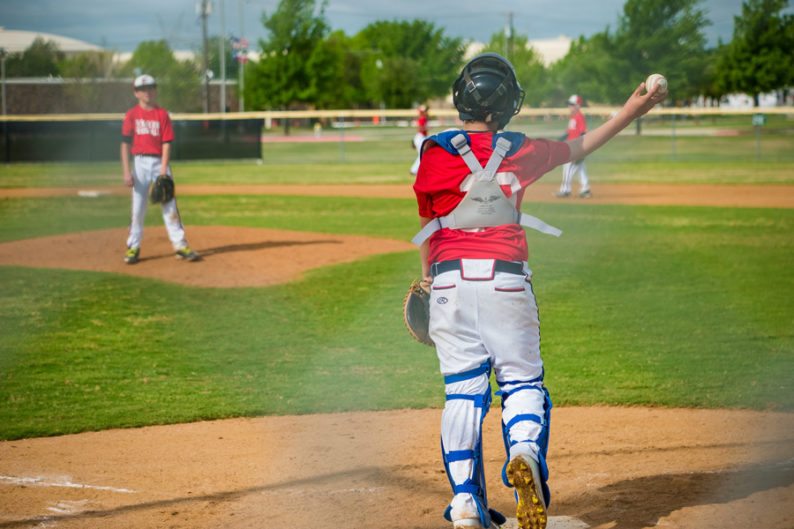 Hundreds of youth baseball teams will participate in a tournament organized by Midwest Sports Productions this weekend, including at sites operated by Johnson County Park and Recreation District. Photo credit Nan Palmero. Used under a Creative Commons license.

Youth baseball and softball leagues usually begin their season in the spring with tournaments spread out across the Johnson County area starting in March, but sports of all levels and types were put on hold as the novel coronavirus spread across the country.

This coming weekend, Midwest Sports Production, a Shawnee-based tournament organizer for youth baseball and softball leagues, will host 350 teams for a tournament played in parks across the metro area. Some teams will play at the Mid-America and Mid-America West Sport Complexes on Johnson Drive.

Assistant superintendent for the Johnson County Parks and Recreation District Shannon Sonnier said the fact that baseball and softball are played outside has certainly made the reopening process simpler because spectator seating isn’t confined to just one section or row — people can spread out around the fenceline to watch. It also helps, MSP director of operations Tori Blake said, that baseball and softball tend to be low-contact sports.

Some precautions planned for the tournament include:

“At the end of the day we really felt like we could take measures to make this as safe an environment as possible,” Blake said.

Sonnier also said the facilities will be encouraging people who are considered to be at a higher risk of developing serious COVID-19 infections to stay home.

Last weekend, the 3&2 Baseball Club hosted their first tournament of the season, but it looked a little different than normal. The tournament, which usually attracts about 250 teams, was limited because out-of-state teams weren’t allowed to travel when the schedule was initially drawn up, 3&2 executive director Jeff Chalk said. As for the tournaments scheduled this coming weekend at the club, out-of-state teams will be permitted to play, but he isn’t expecting a lot of people to travel for youth sports for the time being.

Additionally, there were some precautions in place, including sanitizing surfaces between each game, closing the bleachers and posting signage that promotes physical distancing within the park. These guidelines, however, are mostly voluntary, Chalk said.

“There were folks that were not social distanced,” Chalk said. “We have not opted to go interject ourselves into a group of people and force them to separate. The guidelines that have been passed down are exactly that — they’re guidelines and people can decide if they want to do so or not.”

It hasn’t gone off without a hitch, Chalk said. He estimated that 25 teams in the league have decided to sit out the spring and summer season out of concern for health and safety. Some parents have also expressed concern, Blake said.

“It’s certainly been a little mixed. There’s this pool of people that are like ‘We’ve been ready to go since March, this virus isn’t going to slow us down,’” Blake said of her own observations. “Then, there’s the extreme opposite end of people that are really rethinking their choices in life and really hunkering down and doing everything they can to prevent infection or spread.”

Chalk said it’s important for some normalcy to return.

“I think that youth sports and sports in general, we’ve made them such an important part of our lives, that it really becomes part of our fabric as a society. When you take that away from people, let alone, kids who need that energetic outlet … that really becomes hard on people,” Chalk said.