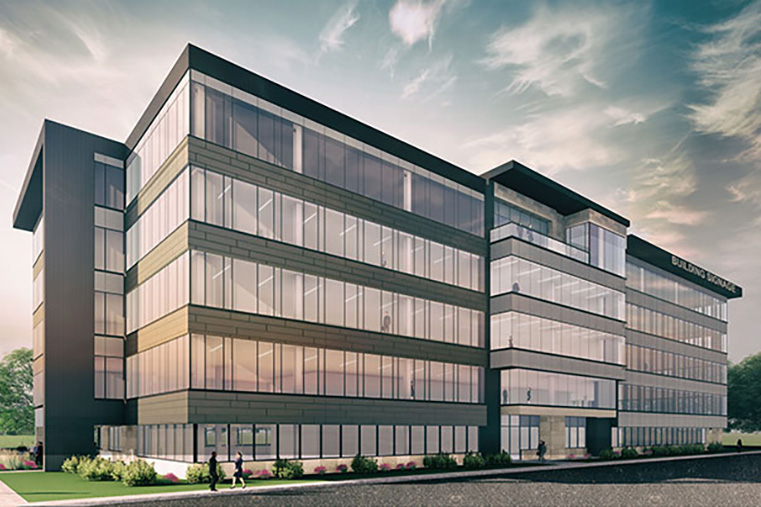 A rendering of a concept for one of the original buildings on the site. Creative Planning has asked for a property tax abatement for a proposed office building.

With uncertainties about the future of office space in the news and budget difficulties looming, the Overland Park City Council reaffirmed its commitment to tax incentives Monday to help build an on-spec office building at Interstate 435 and Nall Avenue.

City council members voted 10-2 in favor of a 10-year, 25% property tax abatement and economic development bonds for construction-related sales tax. The majority said they were taking a long view and that improvements on the now-vacant lot will ultimately bring in more in property taxes than if the lot remained in grass for the next ten years.

The approval was over the objections of Councilmembers Faris Farassati and Scott Hamblin, who doubted the tax breaks would make or break a decision by Creative Planning to build on the lot.

“It’s absolutely amazing,” Farassati said. He referenced a committee meeting on the budget that same night that outlined lower tax collections and their possible consequences. “We are right in the middle of a crisis situation.”

But those who supported the incentives disagreed. Councilmember Chris Newlin noted the property taxes the empty lot brings in versus projected taxes once a business is there. “If we do nothing taxes will be $4,700 to Overland Park for the foreseeable future,” he said. However if a building goes up, taxes are estimated to be $27,000 the first year. “Inaction is a problem in that you’re actually not putting money in the coffers,” he said.

The building in question would be the third to be erected on the site of the old Century Link tower, which was imploded in 2017. The first building and part of the second house the headquarters of Creative Planning, which moved from Leawood.

The developer, Overland One LLC, does not have tenants lined up but is willing to build it as a speculative office building, which is rare in the local market. Creative Planning lawyer Eric Ziegenhorn said the company had been in discussions since the beginning about the third office site because the city was interested in having more office space. Overland Park officials have been seeking top-flight office space for most of the past decade.

The third building is not a high-priority need for the company, though, Ziegenhorn said, since it already has space enough for its headquarters.

“We really are not pressing for this building,” he said. “We have the land sitting there and we have the capital but if you didn’t approve the abatement we would be fine with leaving it vacant ground for now and raising this in ten years.”

However the abatement would be necessary to help with costs of a parking structure and that would make leases competitive with locations on the edge of town with more space for cheaper-to-build surface parking, Ziegenhorn said.

Once built, the third office tower will be a four-story 108,000-square-foot structure with a 386-space parking garage.

The cost/benefit study prepared by the Kansas Department of Commerce said the city would reap more than twice as much in benefits as costs if the development is completed. It listed $1.5 million as benefits and $596,000 as approximate costs of the incentives and abatements. The incentive deal comes with claw backs if the company does not add a required number of good-paying jobs to its rolls.

Supporters and Mayor Carl Gerlach noted that the city is not at risk and that bonds would be paid by the developer. The incentives are not a giveaway of current city money but an investment that will add to the city’s future revenue, Gerlach said.

However Hamblin and Farassati said a business that has been as successful as Creative Planning would not need the incentives. Creative Planning has $45 billion in assets under its management and recently has been in acquisition mode.

The discussion also turned to changes that some people predict for the future of office space. Farassati said the stay-home orders caused by the pandemic have created a popular appetite for working at home and may reduce the need for future office buildings.

Beth Johnson, who spoke in favor of the abatement as vice president of economic development for the Chamber of Commerce, acknowledged that some companies will be rethinking their office space needs.

“But we are not hearing from anyone that all employees will continue to work remotely,” she said. Experts she’s talked to say demand will rebound in 2022. “Having new space available with the greatest amenities possible is going to be what wins the day and we need to be ready,” she said.

Councilmember Curt Skoog added that some large employers may also want to diversify by opening smaller offices away from their main headquarters so employees can work remotely. “I think it’s a win, win, win for the city,” he said.