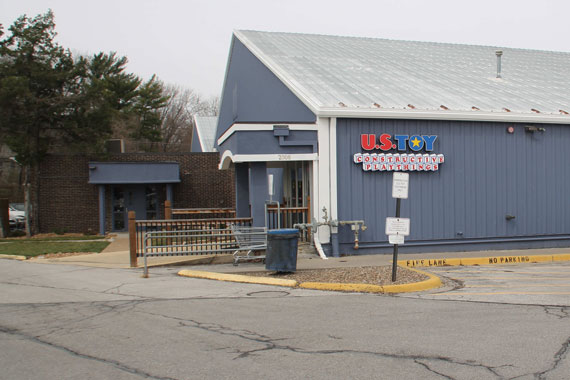 The Leawood City Council this week unanimously approved a final plan for an athletic training and practice facility in the former U.S. Toy Co. building south of 103rd Street and west of State Line Road.

Plans call for the facility, to be named D1 – N It to Win It, to accommodate training and practice for volleyball, basketball, tennis and baseball, and strength and agility training, for youths and young adults potentially bound for Division 1 sports, Kathleen Warman with Warman Architects in North Kansas City, Mo., the project’s architectural firm, told the council at its Monday meeting. Toy Partners of Leawood LLC owns the property.

The site is “challenging” because it sits in a floodplain, and the building is difficult to prepare for reuse, Warman said. The firm has been working with city staff to solve those problems. The project will include extensive upgrades to parking and landscaping and “fairly extensive” interior remodeling.

Ward 4 Councilmember Julie Cain asked Warman whether teams of athletes would be able to practice in the facility. Warman said that they would and that one-on-one training would also be provided. The facility’s operators will prefer that parents drop off their children for training and practice, but “parents won’t be banned” from the facility, Warman said. Trainers and coaches will be independent contractors, not employees of the facility.

The facility’s owner is preparing construction documents and its city permit application and plans to submit them to the city this summer, Warman said. It expects to occupy the facility probably in late fall or early winter.

The Leawood Planning Commission unanimously recommended approval of the project, according to a May 20 city staff report to the council. The roughly 42,450 square foot building was built in 1973 for indoor tennis courts. The site sits almost completely within the 100-year floodplain, and the floodway follows the property’s southwest boundary.

The site has parking lots on the building’s south and east sides with 54 parking spaces. A parking study concluded the proposed use required a maximum of 52 spaces.

The project is expected to pose no significant effects on traffic, according to a May 7 memo from Director of Community Development Richard Coleman to City Engineer Brian Scovill. No stormwater study was required.