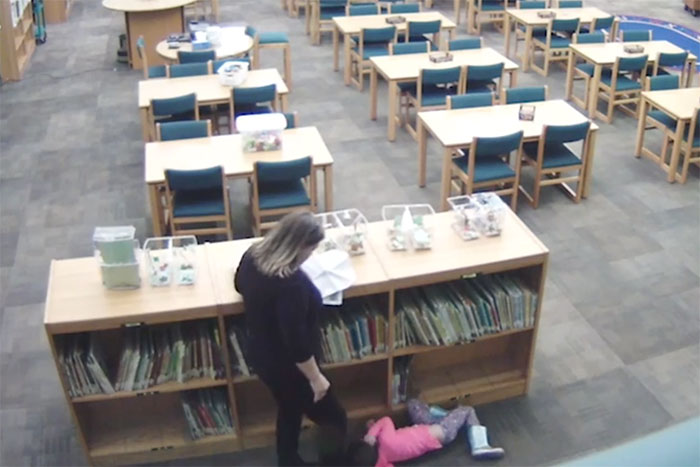 A still image from surveillance video that showed the incident at Bluejacket-Flint Elementary in February 2019.

Smith, who previously taught at Bluejacket-Flint Elementary, was arraigned May 26 in Johnson County District Court. The case pertains to an incident Feb. 21, 2019 in which surveillance video from inside the school library shows Smith kicking one of her kindergarten students.

The district court civil petition indicates that the parent only knew about the incident because the student told her parent after school.

“Had [parent’s initials] not gone to Bluejacket to investigate and demand answers immediately, it is likely that nobody would have looked at the video cameras ever and [student’s initials] would have returned to school to possibly suffer more abuse at the hands of Smith,” the petition reads.

School district policy on emergency safety intervention requires that all staff members are trained in positive behavioral intervention strategies and de-escalation techniques, and also mandates communication with parents as well as immediate documentation, according to the petition.

The civil suit also alleges that the school district “failed to adequately train employees on the proper handling of events that require de-escalation.”

Smith’s criminal case has a no-go hearing scheduled for July 10 in Division 19 of the Johnson County District Court.