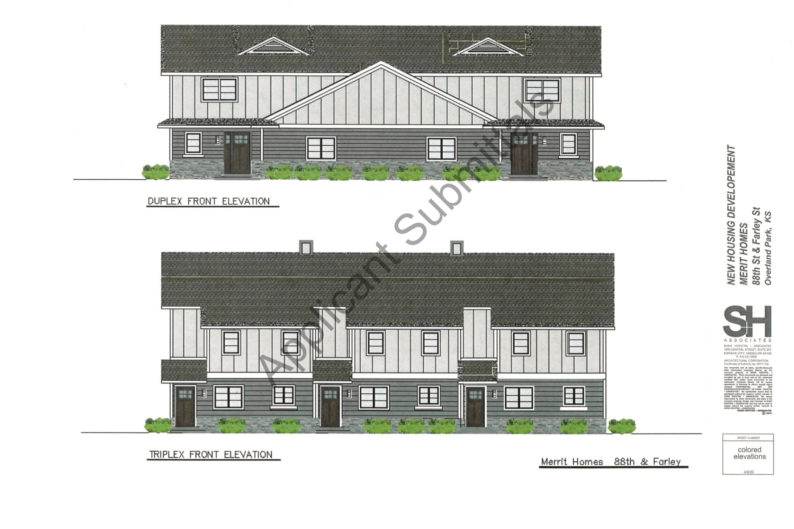 The plan submitted by Merit Homes with the city calls for a series of duplexes and triplexes in the neighborhood. Image credit Merit Homes.

Overland Park’s vision as a city with diverse and affordable housing collided with concerns of the neighborhood near Strang Park last week, as residents there say they don’t want duplexes and triplexes in their single-family area.

Neighbors who met with developers Rajarshi and Maharshi Bhakta Thursday night expressed mostly displeasure after asking questions in a virtual meeting. About 30 attended, according to the Zoom counter.

The developers want the neighborhood rezoned so they can build on about two acres they own on the southwest corner of West 88th Street and Farley Street, near Central Resource Library. The development would have 18 units in all, divided between three duplexes and four triplexes.

The plan is in the early stages, and the Raj Bhakta said the developers are keeping their options open about whether to sell or rent them after built. If they rent, the target price would be $1,500, Bhakta said.

The project is a small-scale development that is meant to address needs for more affordable housing as expressed in Forward OP, the city’s vision statement. With real estate values going up, some leaders have worried that people who work in blue- and pink- collar jobs may not be able to afford to live close to their Overland Park jobs.

Bhakta said the duplexes and triplexes are intended to address that need for housing in the “missing middle” price range. Building single-family homes there would drive the price up to an unrealistic level, he said.

The project could be a home for young professionals just starting out or older residents who want to live closer to family, he said.

But the neighbors were skeptical, pointing out that there are already apartments just to the north of West 87th Street. Many said the multi-family project could bring crime into an area that the city designated for single families.

“We have all the diversity that you’re talking about in multi-family homes,” said one attendee identified as Sondra. “So do us a favor, Raj, and just build single-family homes. You’ll make enough money off of single-family homes because in our neighborhood they sell immediately,” she said.

They also worried about the increased density and how it would affect the schools, traffic and safety in the park. Some asked for an impact study on all aspects, including lighting, traffic and environmental.

Crime and deterioration of the neighborhood was a main subject of discussion, though, with one woman saying the influx of people is bound to bring in a few bad apples. “Density leads to crime,” she said.

Another woman identified as Cheryl said, “I’ve seen a great deal of deterioration in the neighborhood and a great deal of it is due to properties being rented. Don’t tell me that rental doesn’t bring property values down. I’ve lived here 45 years,” she said.

Bhakta said that he believes the development will bring in families and not people with malicious intentions. Many issues will also be addressed by home owner association rules in the new development, he said.

The matter is due to come before the city planning commission June 8.