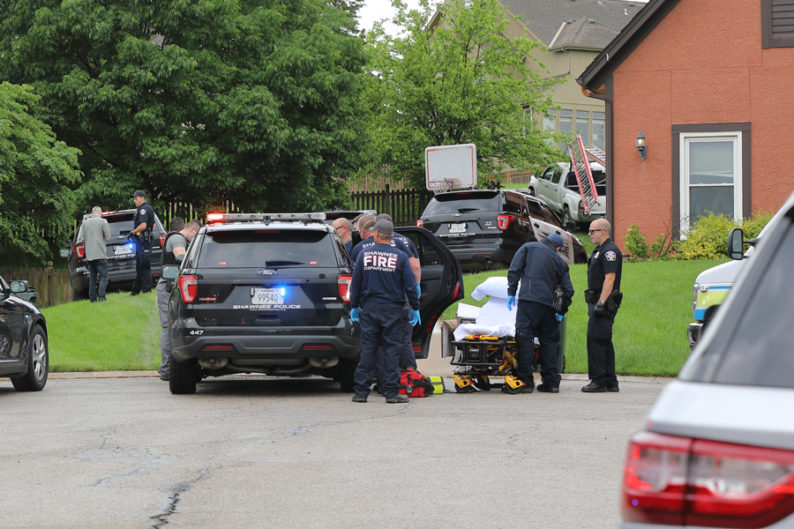 The pursuit ended after the suspect ran into a fence at a Shawnee home and was arrested by officers. Photo credit Mike Frizzell.

A 26-year-old man was arrested after he allegedly stole a white Toyota Tacoma from the QuikTrip near Johnson Drive and Quivira Road in Shawnee on Thursday afternoon, setting off a pursuit that led to a collision with a police vehicle and then a residential fence.

Officers were dispatched to the convenience store, located at 11915 Johnson Drive at 3:40 p.m.

Recorded radio traffic indicates the suspect drove away westbound on Johnson Drive and then turned northbound on Pflumm Road.

A Shawnee police department K-9 officer was on Pflumm Road, where the suspect allegedly swerved the truck towards the officer’s vehicle.

Officers continued chasing the suspect vehicle east on 53rd Terrace, where he turned north on Hallet Street and found himself in another cul-de-sac. The suspect drove up a driveway and through a backyard, where he struck a fence and became stuck on a muddy hill. The suspect was taken into police custody in the backyard.

The Shawnee fire department and Johnson County Med-Act responded to check the suspect for injuries. Med-Act transported him to an area hospital for treatment including a possible shoulder injury. His injuries were described as non-life threatening.

Major Jim Baker, public information officer for the Shawnee police department, described the damage to the patrol car as “relatively minor,” and said no other injuries were reported.

Booking logs show the suspect, only identified as a 26-year-old Bonner Springs resident, was booked into the county jail at 1:06 a.m. Friday.

We’ve reached out to Baker for additional clarification on the events of this incident. Check back with this report as more details become available.