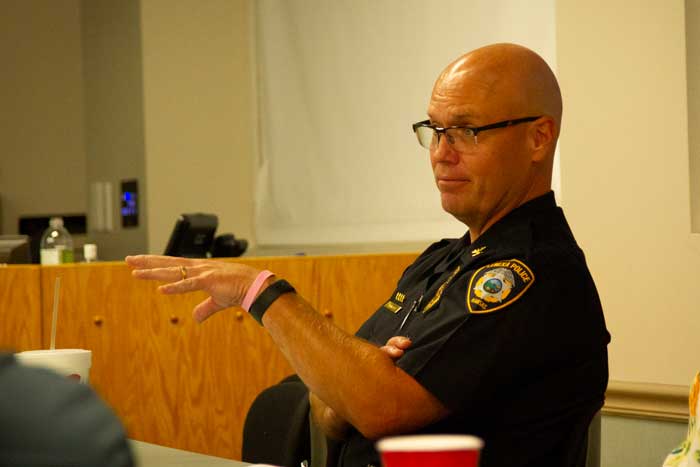 Lenexa Police Chief Tom Hongslo issued a statement on the death of George Floyd in Minneapolis earlier this week, saying the firing of the officers involved had been the right move. "We all have the obligation to strictly adhere to the use of force policy and intervene when witnessing an incident that is obviously out of policy and morally wrong," Hongslo wrote. File photo.

Following the death of George Floyd in Minneapolis this week after a police officer pressed his knee into Floyd’s neck even after he became unresponsive, Lenexa Police Chief Tom Hongslo issued a statement to his officers saying that police had an obligation to strictly adhere to guidelines that minimize the use of force, particularly related to restricting breathing.

The message was shared with the community on the department’s social media profiles accompanied by a note from Deputy Chief of Police Dawn Layman.

“It is not often that we share internal communications to the general public,” Layman wrote, “however, as soon as I read the message I knew there would be tremendous value in sharing it with our community. As citizens taking in so much information on the news and social media, you no doubt have many sincere questions. The importance of this message not only speaks volumes for the leadership at Lenexa PD, but also shows the culture and professionalism that we instill upon our personnel on a daily basis.”

Hongslo’s full message is copied below:

Most of you have already heard of and watching the incident in Minneapolis where George Floyd died after the officer kneeled on his neck for a prolonged period of time. In my opinion, the Minneapolis Police Chief’s firing of the officer and the officers that did not intervene was the absolute right decision.

We all have the obligation to strictly adhere to the use of force policy and intervene when witnessing an incident that is obviously out of policy and morally wrong. After using the minimal force necessary to effect an arrest, all police officers must control their emotions and switch to a caretaking mode to ascertain if the suspect needs medical attention and is not in danger of injury. Restricting a suspect’s breathing has caused many unnecessary deaths throughout the United States. At Lenexa PD, we have always set the standard high on use of force training and the review of use of force incidents.

Many of us have seen these incidents play out throughout the United States with serious detrimental effects to those communities. Unfortunately, we are in a profession where many judge all of us on one person’s actions. We have already had phone calls from our community asking specific questions on training, de-escalation, use of force, etc. They are questions we can confidently answer due to our training, reviews and quality of professional employees.

You most likely will also hear comments regarding this incident while working. If possible, take the time to listen to their concerns and answer their questions. We all greatly appreciate the high level of support we get from our community.