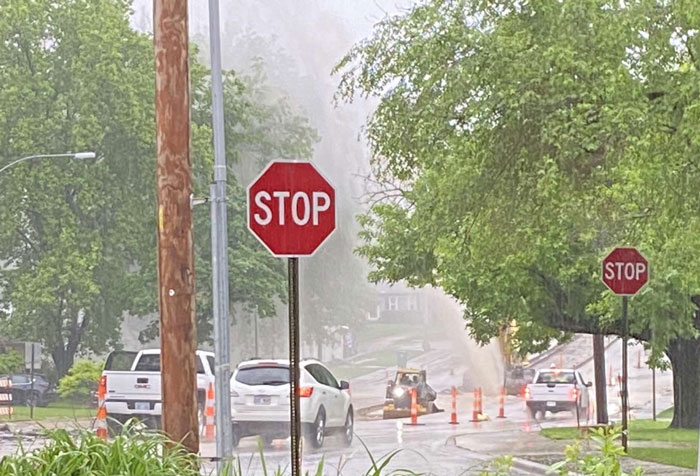 The water main break appeared to occur during median deconstruction work being performed as part of the Roe 2020 project. Photo submitted by Samantha Cordova.

UPDATE: Roeland Park Public Works Director Donnie Scharff said the water main break happened as a result of median removal in relation to the Roe 2020 project. As Miles Excavating was removing curbs and pavement, a 12-inch water main with water pressure at the break point was hit, causing water to shoot roughly 30-feet into the air, he said.

WaterOne sent repair crews quickly after being notified about the break, Scharff said. Water services were disrupted but were quickly restored, he said.

Median deconstruction on Roe Boulevard — part of the Roe 2020 project — seemed to have caused the water main break. Roeland Park police officers helped guide Roe Boulevard traffic as the city worked with WaterOne to fix the break, according to a city tweet.

Once the shooting water subsided, crews began working to remove the water remaining in the deconstructed median.

After crews began this work, a Roeland Park resident who lives at 55th Street and Roe Boulevard reported they did not have water for about 40 minutes.

Roeland Park city officials could not be reached for comment by time of publication. Below is a video of the water line breakage, as submitted by Ramon Garcia.