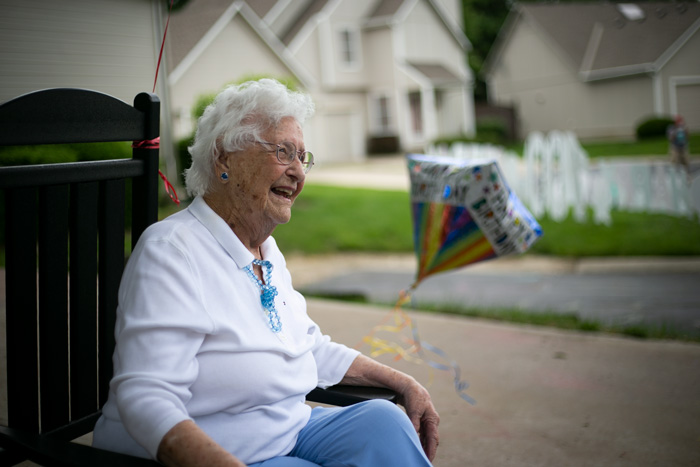 Her children surprised her by organizing the parades because they wanted to do something special while staying safe during the COVID-19 pandemic.

“My mother has been a rock to the family; she’s the matriarch,” said her son, Nile Glasebrook of Overland Park. “And we’ve got some longevity in the family: Her mother lived to be 104.”

And so, a stream of cars from her church, Village Presbyterian Church on Antioch, drove by her home Tuesday morning. A second wave of cars from P.E.O. Sisterhood, of which she’s a lifelong member, came through the Treesmill neighborhood in the early afternoon.

“Heavens to Betsy, I can’t believe it,” Glasebrook said from her rocking chair on the driveway.

Born May 26, 1920 in Kansas City, Mo., to S.R. and Sola Bradley, her family moved to the Johnson County countryside in 1925. She attended South Park Elementary and graduated from Shawnee Mission Rural High School (now Shawnee Mission North) in 1937.

To correct her pigeon toes, she took dancing lessons from age 3 to 17 at the Kansas City Conservatory of Music and Dancing. She once led a dance recital at high school. She danced and taught tap, ballet and adagio for many years.

A lifelong member of Delta Delta Delta, she graduated with a teaching degree in 1941 at Baker University. Like the class of 2020, her graduation was also “very different” because the United States was about to enter World War II. Her male peers left before the graduation ceremony to enlist.

While teaching in Arkansas City, Kan., she married her husband, Arthur Glasebrook, on May 8, 1943, when he returned for a few days from overseas.

When she got pregnant with their first child, they returned to the Kansas City area from California, where she was caring for family. She remembers being eight months along and getting the mumps and measles while on the train.

She taught kindergarten at South Park and coached seventh and eighth-grade boys basketball.

Jean and Art Glasebrook went to every continent (except Antarctica), visiting and/or living in places like Canada, Germany and other European countries, Japan, Taiwan, Egypt, Lebanon and different parts of the U.S. Together, they had four children: Jane Anne, Nancy, Nile and Brad, who was born in Japan during the Korean War.

“I blame it on my tri-Delta sisters in Seattle,” she joked about her fourth pregnancy. “I hadn’t seen Art for two years and they gave me the fanciest nightgown I had ever had in my lifetime as a going-away present. Oh it was sexy.”

After the Korean War, they returned to the Kansas City area, and Art worked for Trans World Airlines and the Kansas City Police Department. They then moved to Table Rock Lake in southwest Missouri and lived in retirement for several years before returning to Overland Park. They enjoyed listening to Lawrence Welk together. After her husband died in 2003, Glasebrook picked up coloring and has filled many intricate coloring books.

A lifelong adventurer nicknamed “Go Jean Go,” her first flight was at age 8, in 1928, when a pilot who served with her father in World War I came to the area and took the family up in his private airplane.

“He said, I had to come see the mechanic that kept me alive,” she recalled.

Glasebrook has been up in a hot air balloon, two helicopter rides that landed on glaciers in Alaska, and a racecar going 165 mph at the Kansas Speedway.

“The only thing is, I haven’t jumped out of a plane,” she joked.

She enjoyed many adventures, mostly with her granddaughter, Tara Glasebrook, visiting Costa Rica, Peru, Bolivia, Scandinavian countries, Russia, Argentina, China, all 50 United States and most of Canada. They went to Iceland last summer.

She grew up around horses and buggies, and remembers her parents drove a Model T Ford and Hupmobile. Fast-forward 90 years, and Glasebrook still “can’t believe we put a man on the Moon.” Her secret to reaching 100: two slices of bacon in the microwave every morning. A “voracious” reader, she enjoys books, crossword puzzles, gin rummy and spending time with family.

“My family, no matter what, we recover and keep going,” she said. “We’ve always been optimists. That’s not saying we haven’t had ups and downs because we have, but we always think things will get better, and they have.” 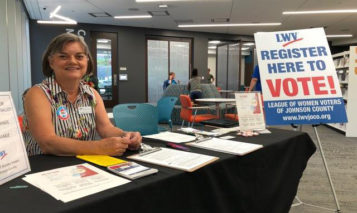 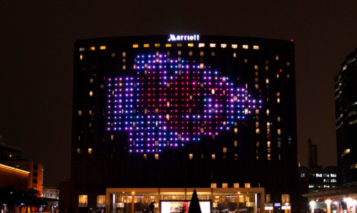 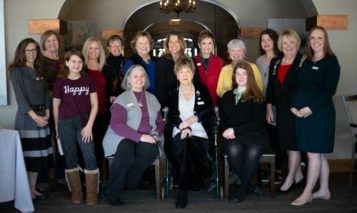 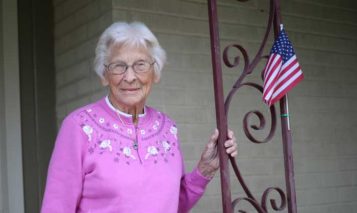