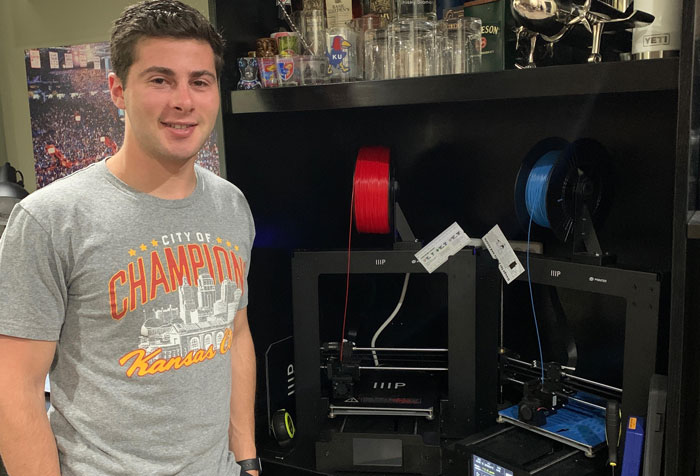 Gregory Bortnick, a junior studying chemical engineering at The University of Kansas, found a template for ear straps and modified it to make the straps more effective. It takes two-and-a-half hours to make seven straps, and more than 3,000 have been made so far. Photo courtesy of Alexandra Drill.

Gregory Bortnick, a Leawood resident and Pembroke Hill alumnus, comes from a family who has always been active in volunteer work. He knew he wanted to help during the coronavirus pandemic so he searched the internet to figure out what people needed most.

Bortnick’s curiosity and desire to volunteer drove him to make more than 3,000 straps to relieve ear pain for mask wearers. Hundreds of the ‘Ear Ease’ straps were donated to hospitals locally and nationally, but Bortnick, a University of Kansas engineering student, said he thinks the straps can help a variety of others, including restaurant workers and people just going to the store.

“I just really want everybody to be comfortable, because at the end of the day, if you’re not comfortable you can’t do your best work,” Bortnick said.

Bortnick and his younger brother, Andrew Drill, are now taking shifts making straps on three 3D printers in his room. Bortnick modified a template he found online to make the straps more effective, and spends two-and-a-half hours to make a batch of seven straps.

The first round of donations were taken to friends who work at hospitals. After Drill received requests to send donations to New York City hospitals, the 11-year-old started adding cards in each donation box. Alexandra Drill, Bortnick and Andrew’s mother, said it’s rewarding to see how the straps can make someone’s day better — no matter how small of an inconvenience it fixed.

“We’re thrilled and humbled at the response of the community, and we’re just happy to provide as many as we can for as long as is necessary to just make a little bit of difference in our world,” Alexandra said.

The brothers are now making 25 donated straps for the Overland Park Police Department in honor of Officer Mike Mosher. The straps will be blue, with Mosher’s saying “go big or go home” on them, Alexandra said.

While many of the Ear Ease straps are donated, they can also be purchased for two for $1. The money goes to cover the cost of 3D printer expenses, Alexandra said. To purchase Ear Ease or to make a donation to the cause, contact Bortnick or Alexandra on the Ear Ease Facebook page here.