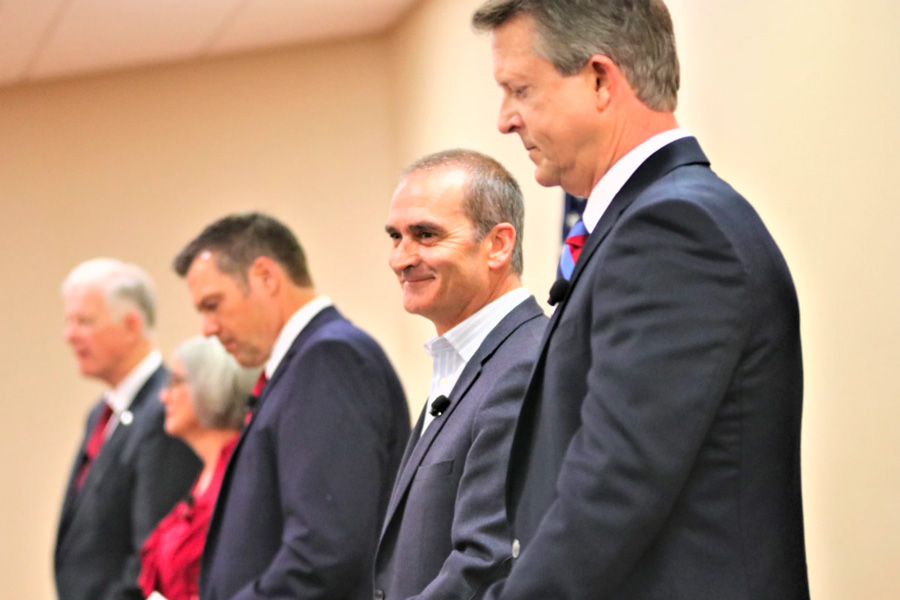 By Jim McLean and Scott Canon

MANHATTAN, Kansas — The Republican candidates for the U.S. Senate agreed in a live-streamed Saturday morning debate that they want to do all they can for the president and his policies.

They differed mostly on who among them could offer President Donald Trump the strongest ally on Capitol Hill and on who had the best chance to beat a Democrat to get there.

The two best-known candidates — former Kansas Secretary of State Kris Kobach and U.S. Rep. Roger Marshall — clashed most directly with each other. They challenged each other’s conservative bona fides and their respective electability in November.

State Senate President Susan Wagle championed herself as a foil to Democratic Gov. Laura Kelly and a powerful force in reopening a Kansas economy flattened by the coronavirus shutdown.

The five would-be senators met in a largely empty hotel ballroom. (They all shook hands at the end, despite the threat of the coronavirus.) The audience was almost entirely online through the Kansas Republican Party’s Facebook Live feed, restarted in the middle of the opening arguments because the audio made them sound as if they were speaking through kazoos.

When the technical problems got solved, the farm-focused debate saw the candidates focused on attacking China over trade issues, backing Trump in his ongoing trade war and talking about who’d best argue the case for Kansas ranchers and farmers in Washington.

The winner of the primary will most likely face state Sen. Barbara Bollier, who left the Republican Party last year.

Here’s who the candidates are (in alphabetical order) and some of what they said Saturday:

People who live in the Kansas City area know well the Bob Hamilton Heating Plumbing radio commercials and the business’ ubiquitous pink vans. His campaign has been financed largely by a $2 million loan from the candidate.

He said he was the “one candidate up here on stage who has created jobs.”

His understanding of farm issues, he said, comes from talking with people who work plots of ground he owns in Kansas.

“They want trade, not aid. I’ve yet to talk with a farmer who wants to be subsidized.

Every farmer I’ve talked to is 100% Trump with the trade deals,” he said. “China rigs the system and they steal our technology. …. We have a China problem in this country.”

Hamilton said he’d try to land a spot on the Senate Agriculture Committee, but that “someone would have to show me how to do that.”

Mostly, he repeated that he was a conservative opposed to abortion, to government regulations and to gun regulations.

“I am a true conservative that can win in the fall,” he said. “The stakes are high. We cannot pick the wrong candidate and allow the Green New Deal or socialized medicine.”

Kobach stands out in the race as the best known of the candidates. He served as Kansas secretary of state and beat then-Gov. Jeff Colyer in the 2018 Republican primary for governor before losing the general election to Kelly.

He’s built a national reputation as an immigration hardliner and worked with Trump briefly on a since-abandoned effort to document and root out voter fraud.

Some leaders in the Kansas Republican Party fear Kobach might win the primary but that, as a political lightning rod, he’d be doomed in November. In April, The Kansas City Star reported that the state party chairman wrote letters asking Wagle and Lindstrom to drop out of the race so that Marshall would have a better chance to beat Kobach.

On Saturday, Kobach made his case as a confidant of, and valuable ally to, Trump.

“I will carry the ball for the president on immigration … and I will know the issue more than other senators claim.”

Kobach said he’d talked with the president a week before about Kansas farm issues and that his relationship with a Trump White House would make him more able to fight against entrenched special interests in Washington.

Along with immigration issues — he’s involved in a privately funded effort to build a wall on the U.S.-Mexico border — Kobach said Trump will look to him on trade issues. He said it’s time for the U.S. to pull out of the World Trade Organization, an arbiter on international trade disputes.

He ran for lieutenant governor in 2002 as the running mate to then-state Treasurer Tim Shallenburger. They lost.

Lindstrom said Republicans can rely on him as a conservative voice eager to fight against liberal Democrats.

“The country is under attack (from) Democrats touting socialism as a way forward … open borders (and) disregard for the sanctity of life.”

“Farmers are willing to suffer short-term pain for long term gain, but they do not want to be martyrs who die on this hill.”

Without naming Kobach, he suggested that nominating him for the Senate would amount to “Kansas insanity” — sending the same candidate into a general election and expecting a different result.

He’s a two-term congressman from a sprawling district that covers western Kansas. He’s been endorsed by the Kansas Farm Bureau and former U.S. Sen. Bob Dole.

Marshall accused Kobach of “fake news” in criticizing his role in shaping the latest farm bill that decides agriculture subsidies and a range of food programs.

Even more pointedly, Marshall argued that giving the Republican nomination to Kobach risked sending a Kansas Democrat to the Senate for the first time since the Great Depression.

“Just like you handed the governor’s race to Laura Kelly,” he told Kobach, “you’re about to hand the Senate race to Barbara Bollier.”

Yet, mostly, he championed himself as a proven Trump loyalist, saying over and again that he’d voted in line with the president 98% of the time.

Marshall also spoke of “socialist Democrats” whose New Green Deal plans to fight climate change mark “the end of Kansas agriculture as we know it, the end of oil and gas as we know it.”

She came to the debate barely 24 hours after the Kansas Legislature wrangled through the night before passing a bill that would strip the governor of some of the emergency powers she’s used to shutdown much of the state economy during the coronavirus outbreak.

Wagle’s a Wichita conservative largely responsible for blocking the expansion of Medicaid in Kansas despite support from a majority of the senators who elected her their president.

“I reined in Gov. Kelly” on the Democrat’s actions to check the spread of the virus. “Even now, she has kept the doors to our VFW and American Legions closed. … We’re going to open up Kansas and open it up safely.”

“I have a proven, reliable, respectable record … as a conservative,” she said.

The debate came barely a week before the June 1 deadline for candidates to officially file for a place on the Aug. 4 primary ballot. So speculation remains, revived recently in national Republican circles, about whether U.S. Secretary of State Mike Pompeo might yet run for the Senate.

Pompeo was a congressman from Wichita before he was tapped to head the CIA for the Trump administration and was later elevated to the head of the State Department.

A series of trips to Kansas fueled speculation early this year that Pompeo would run for the Senate. He demurred and has even said he’d be more likely to run for president some day.

Meanwhile, he’s come under increasing criticism for telling the president to fire the State Department’s inspector general — while that agency watchdog looked at an arms sale to Saudi Arabia and whether Pompeo assigned government workers to pick up dry cleaning and walk the secretary’s dog.

More recently, “Madison Dinners” hosted by Pompeo and his wife at public expense have come under scrutiny, criticized as a way for the secretary of state to court the wealthy and powerful for help in some future run for office. The Wall Street Journal reported this week that at least one of those dinners brought in people from Kansas.

Scott Canon is managing editor of the Kansas News Service. You can reach him on Twitter @ScottCanon or email scott (at) kcur (dot) org.