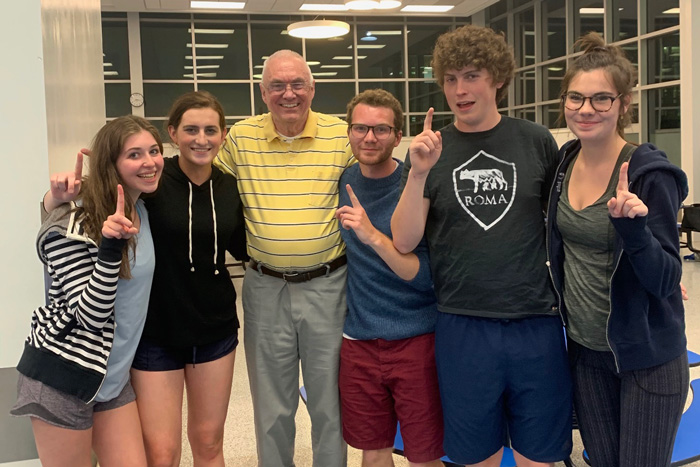 Nick Paris, one of the longest serving teachers in the Shawnee Mission School District, is retiring after 54 years in the classroom.

A psychology teacher and Lancer through and through, Paris graduated from SM East in 1960. To come full circle and finish out his career at his alma mater makes this year particularly special.

He taught 20 years at Trailridge Junior High and 34 at SM East. In fact, he’s been teaching so long that some of his students are already retired.

On his first day on the job — an eighth-grade classroom in 1966 — his class of rascally boys “took me for a ride.”

“They taught me a lot my first year,” he said. “These boys, oh my glory, they were so bad, but actually I’m glad I had them my first year because then I knew I could only be so nice and then I had to clamp down. My second year, I came in there breathing fire, slammed the book on the desk, the kids were all like *gasp* and I had the greatest year I’ve ever had in my entire career.”

He wrote six musical comedies during his career, made up more than 30 simulation games, and enjoyed engaging with students when they found mutually interesting subjects, even when standardized testing came on the scene and limited his creativity.

“If you can construct lesson plans such that you enjoy giving them and/or grading them, I think that’s really part of the battle,” he said. “How many jobs can you say you looked forward to every Monday morning for your entire career? Pretty rare. Try to have fun and the kids will have fun. You can’t take anything too seriously.”

Paris has many fond memories, but one in particular takes the cake.

It was 1987, his first pep assembly he was in charge of organizing, and he put whipped cream on a slippery slide for the student-athletes to slide across. It made a huge mess but everyone had a blast. Later on, the whipped cream wouldn’t come off the gym floor, which had to be replaced for $10,000.

“I had never seen so much whipped cream in my entire life; it was about 10 inches thick,” he said. “It was the greatest pep assembly ever.”

His greatest memory as a student: The day he found out he made the National Honor Society and got to tell his parents.

“I was not that great a student in high school, very day-dreamy,” he said. “I did OK but when I got chosen for National Honor Society, it was really a thrill. I came home and told my folks, and they both dropped their forks. They were really shocked, and it was fun to surprise them.”

At age 77, Paris said he kept up with his ever-evolving field by checking Science Daily — and listening to his wife, Merilyn Paris.

“I married the most intelligent woman I’ve ever met in my life, the sharpest gal in Johnson County,” he said. “She’s a news junkie.”

Fun fact: She sat in front of him in Algebra II, but he was too smitten with someone else to ask her out.

With schools being shuttered for weeks, Paris said he told his sixth hour students that he really misses them — their energy and curiosity and engagement in his lesson plans. One recent discussion covered birth order: Theories on how the order that children are born affects their behavior. Another discussion was about new research that figured it takes 1/5 of a second to fall in love.

After retiring, Paris plans to work on his writing projects. He may turn his short story, “The Gender Evolution,” into a novella. The plot is about what would happen “if women took over the world.” He plans to remain in Overland Park and follow the Lancers.

Paris said retiring during the pandemic was “a little disappointing, naturally” and not like what he expected. He may write a farewell letter to the school and hopes to see his students again at a graduation ceremony later this summer. But in case he doesn’t, here’s his message to the students:

“You have a lot of challenges ahead for you in the upcoming years because of this crisis. Try to keep a positive attitude. Regard it as a challenge rather than a threat. Keep an optimistic, explanatory attitude. Always look at the half-full glass. Don’t get too discouraged. There will be lots of opportunities for you.”