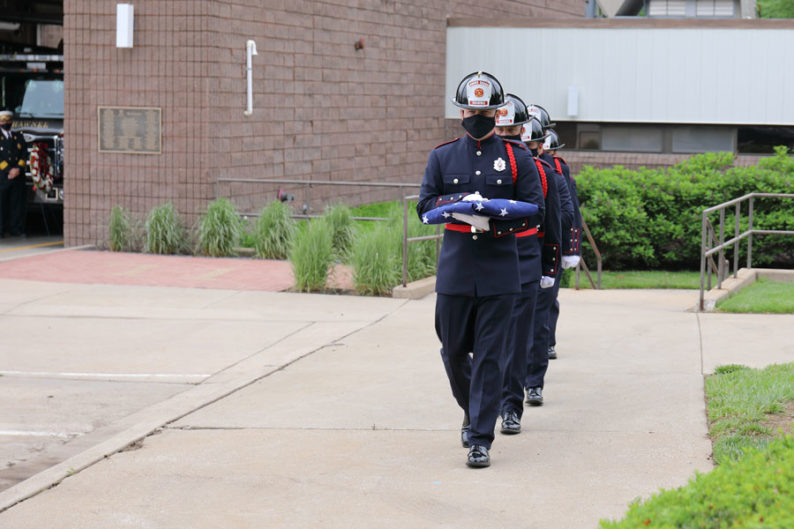 Firefighters honor their fallen colleague John B. Glaser during a ceremony Friday morning. Glaser was 33 years old when he died after responding to a house fire on May 22, 2010. Photo credit Mike Frizzell.

Shawnee firefighters gathered this morning for a short tribute to one of their own who was lost in the line of duty ten years ago.

On May 22, 2010, at 8:52 p.m., John Glaser and his crew were called to a nearly 6,000-square-foot-home near Pflumm Road and Blackfish Parkway to investigate a fire alarm. As they responded, dispatchers received multiple 911 calls reporting heavy smoke. Once on the scene, neighbors told firefighters that there was possibly an elderly couple and a dog inside.

Additional firefighters entered the house to help in the search for Glaser. Crews located him a few minutes later and carried him out of the home to a waiting ambulance. He was pronounced dead a short time later at a nearby hospital.

“This is just a brief formal recognition, but the guys remember him every day,” Chief Mattox said.

New firefighters receive a half-day of training all about Glaser and the night he died. Chief Mattox says the training is taught by a Battalion Chief who was Glaser’s search partner that night.

Several of Firefighter Glaser’s family members attended the ten-year tribute, including his parents and brother.