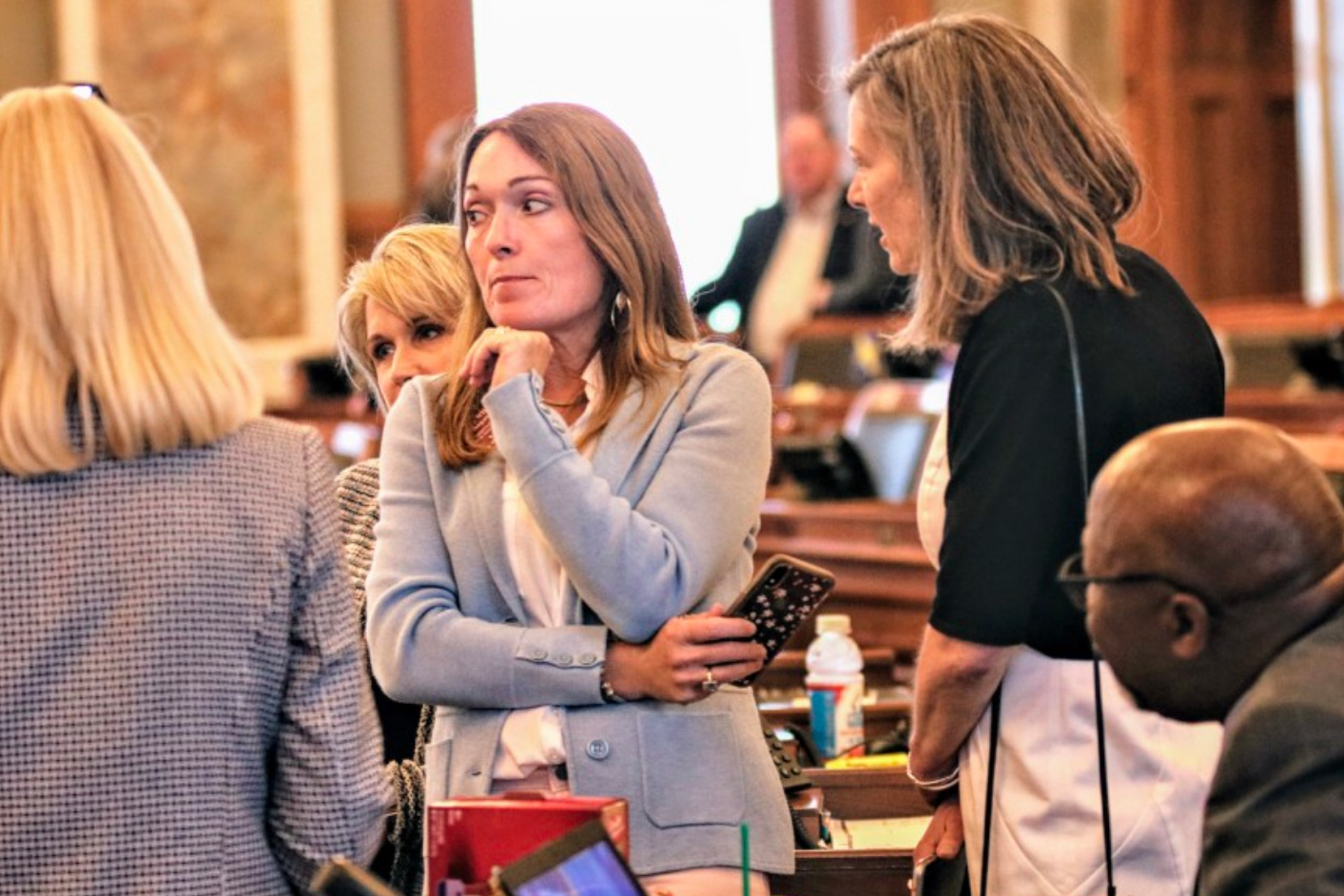 TOPEKA, Kansas — In a one-day session that wrapped up a legislative year upended by the coronavirus, state lawmakers early Friday reined in the governor’s powers to respond to the public health crisis.

Democratic Gov. Laura Kelly blasted the all-nighter rush that drafted the bill, but she stopped short of threatening a veto.

A wide-ranging bill that passed after sunrise lets the governor’s emergency declaration — notably, the power to shut down businesses — extend through the end of May. After that, she’d need a panel of lawmakers to extend it.

And businesses that broke the governor’s orders would face just civil penalties, rather than misdemeanor criminal charges that they’d face currently.

The Republican-controlled Legislature also passed protections for businesses against some lawsuits related to the COVID-19 outbreak.

Meanwhile, efforts to expand Medicaid to cover the health care bills of another 130,000 or so people in the state vanished for another year.

Lawmakers worked through the night, but they didn’t adjust state spending to account for a dramatic drop in tax revenue — yet another effect of the economic shutdown triggered by the pandemic. Another, extraordinary, session could still bring legislators back to Topeka to balance the books. The governor could make cuts or the budget action may wait until next year.

Fears of spreading the coronavirus cut the first part of the session short. Ongoing concerns about infections resulted in a single, particularly contentious day that made clear the crisis didn’t push aside partisan rivalries.

The top Democrat in the Kansas House criticized the quick movement on bills that few lawmakers had time to review before the final vote came Friday morning.

Republicans argued they had little choice but to hurry bills through.

“This is the first time we’ve had a pandemic and had mere hours to come up with a solution,” Republican Rep. Fred Patton said.

Protesters rallied outside the Capitol to press Kelly, and lawmakers, to more quickly and fully open up the state’s economy. Their chants came as conservatives inside the Statehouse continued to criticize Kelly for what they see as a too-sluggish phasing out of her stay-at-home orders. Meanwhile, clusters of coronavirus continue to grow at the close-quarters meatpacking plants in southwest Kansas.

In the House and Senate, some lawmakers and staff wore masks. The House allowed members to stay in their offices and return to the chamber for votes.

Because they only had one day, tensions ran high. After some extended comments from a Democrat, the Senate’s Republican majority leader said he would use a procedural move to end debate and move bills forward as quickly as possible.

The top Democrat in the Senate said the high-speed process meant lawmakers couldn’t have a full debate and offer amendments.

“We ought to close the blinds and turn out the lights because this is a dark day for democracy,” Sen. Anthony Hensley said.

Kelly and some Republicans have clashed for weeks over her actions to control the coronavirus. Some lawmakers grew increasingly frustrated that many businesses were closed and that some have not yet been allowed to reopen.

Lawmakers moved to put some limits and oversight on her authority. They voted to extend her disaster declaration through the end of May, but then a panel of legislative leaders and the governor would need to approve any further extensions.

It comes after some Republicans have been frustrated by Kelly’s orders that closed many businesses.

“Her emergency declarations apply to all of Kansas and there are counties that still have had no cases,” Wagle said.

Kelly’s office issued a statement before the vote saying she was open to a discussion about changing the state’s emergency law. But it criticized the hasty effort to approve changes.

Legislative leaders would also have oversight of the $1.25 billion in federal coronavirus aid for Kansas.

The day before lawmakers returned, Attorney General Derek Schmidt said Kelly may not have had the authority to issue a second emergency declaration after the first one expired.

Health care providers would be protected from lawsuits over things like procedures that were delayed because of the emergency.

Businesses would also have some protections against lawsuits over coronavirus infections unless they took reckless action. The bill also bars some product liability lawsuits.

The provisions were scaled back somewhat from what business groups initially requested. It now goes to Governor Laura Kelly for consideration as part of a larger coronavirus response bill.

The year started with high hopes from Medicaid expansion supporters. A bipartisan compromise forged by the governor and a top Senate Republican would have provided health coverage for more than 100,000 low-income Kansans.

Republican leaders blocked Medicaid expansion after tying it to a constitutional amendment on abortion. That frustrated expansion supporters, who threatened to block the budget.

Democrats made a last-ditch effort in the Senate to offer Medicaid expansion as an amendment on Thursday. But that was shut down on procedural grounds.

“We have been bridled and throttled this entire year when the votes exist from this chamber to pass Medicaid expansion,” Democratic Sen. Barbara Bollier said. (She, like Wagle, is running for the U.S. Senate.) “We have the votes.”

A constitutional amendment saying there’s no right to abortion in the Kansas Constitution suffered the same fate as the Medicaid expansion plan it was tied to.

Both died as part of high-stakes gamesmanship that defined the session’s politics.

The amendment came in response to a state Supreme Court decision that found a right to abortion in the Kansas Constitution. Conservatives want to undo that with the amendment. They fear the court’s decision could pave the way for knocking down abortion restrictions already in state law.

Critics of the amendment say it could open the door to fully banning abortion in Kansas.

Lawmakers voted to give taxpayers more information about their property tax rates. Cities and counties would have to send notices to residents when property tax collections will go up, starting next year. It also requires local governments to hold public hearings on tax rates.

Republican Sen.Caryn Tyson said it gives property taxpayers a better chance to weigh in on increases.

“The bill is about transparency,” she said. “It’s about local control, and it’s about taxpayers having a voice.”

The bill repeals a 2015 cap on property tax increases by local governments.

In response to the economic challenges caused by coronavirus, the plan also gives people three additional months to pay their May property taxes without penalty.