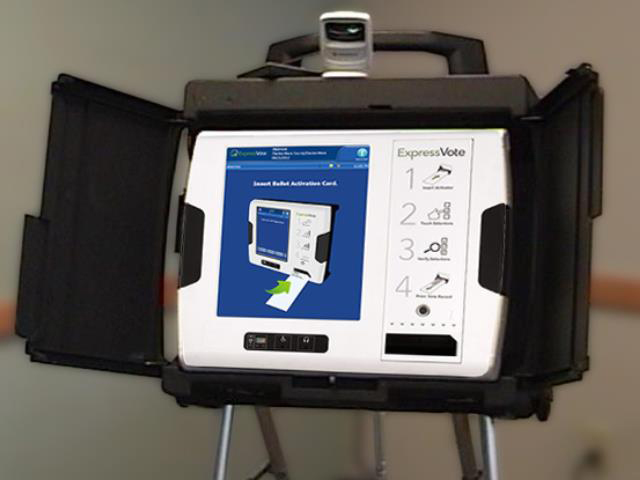 Johnson County spent $10.5 million two years ago on 2,100 new ExpressVote machines. Now, it's spending another $1 million to replace some of them with separate tabulators which will perform a function that is already built into the original system.

Two years ago, Johnson County announced to great fanfare the purchase of 2,100 new state-of-the-art touch-screen voting machines. The machines would mark ballots and then count them – an innovation that had never been offered before.

On Thursday, commissioners decided to send some of those machines back. For around $1 million more, they’ll exchange them for some other machines whose only use is counting the votes — a function that the first machines could already do.

Commissioners voted unanimously Thursday for a deal that would swap out 240 of the like-new Express Vote machines they bought in 2018 for DS 200 tabulators from the same maker, Election Systems and Software of Omaha. County officials plan to get most of the money reimbursed from federal funds for pandemic relief.

There was nothing wrong with the tabulators on the first machines. The main reason officials want to buy them is to adapt to new distancing and sanitation rules that will be in effect at polling places, said Election Commissioner Connie Schmidt.

But election officials also hope they will fix some flaws that were perhaps unanticipated when the first ones were purchased. Because of those earlier machines, extra work has been baked into the job for election workers who must deal with them.

Having each machine be a separate vote counter means a longer time to boot up in the morning, with 4:30 a.m. the call time for election workers so the polls can open on time, Schmidt said.

Each machine also generates its own USB report of the vote, and those USBs are tricky to load correctly, especially at the end of a long day when workers are tired, she said. At the end of the day, this set-up leaves the election office with 2,100 individual drives to handle.

The new tabulators, on the other hand, generate only one thumb drive per tabulator, with one or maybe two tabulators per polling place. They also have the ability to scan hand-marked paper ballots so they can be counted right away. Schmidt said she is expecting more hand-marked ballots than normal because people may be squeamish about using the touch screens during the COVID-19 outbreak.

All in all it’s a simpler system at a time when there are likely to be many more inexperienced poll workers, she said.

“I think it’s a great idea,” said Commissioner Janeé Hanzlick. “I don’t know why it wasn’t chosen at the beginning when the other machines were purchased.”

In fact the former election commissioner, Ronnie Metsker, held off until weeks before the 2018 primary specifically to get the ballot marking/tabulating combo. Other large Kansas counties had already bought and were in some cases using similar machines without built-in tabulators. Metsker figured the newer version would take up less room in storage and would save voters the trouble of walking the ballots over to a separate vote counter.

The commission bought into the idea at the time, voting unanimously for the $10.5 million purchase.

They stood by the machines and ES&S a couple of months later, after a computer coding glitch caused results in the closely contested primaries to be delayed into the following day.

That was attributed to errors in the reporting software, not the tabulators. Commissioners said at the time they appreciated the company owning up to the problem and fixing it. The equipment behaved in the following general election.

But with another high-interest election on the horizon, Schmidt says it will feel better to be using the equipment the same way that the other big Kansas counties do. Where once election officials were proud to be first in the nation, they’re now happy to blend in with the crowd.

County commissioners remain on board with the next round of ES&S equipment. No one contacted would directly call the previous purchase a mistake, though some did say they wish the separate tabulators could have been used all along.

Hanzlick made election transparency a campaign issue during her 2018 run for commissioner. “It does go back to my concern that there wasn’t enough research done on (the new machines) and this confirms that. But it’s water under the bridge now,” she said.

“I wish this system that we’re now putting in place had been chosen. I can’t speak to whether it was a mistake, but I am very glad we’re moving ahead with the system now,” she said.

Commissioner Becky Fast agreed. At a time when voting cyber security was much in the news, Fast said she and others had questions about the new purchase. “I had a lot of concerns and so did the League of Women Voters, and a lot of community groups,” she said.

For example, some noted that the paper ballot presented for voters to check has a bar code on it. While voters check their choices in English, the tabulator reads the bar code, leaving a possibility for discrepancies. The new tabulators will also read bar codes.

Some transparency advocates also have wondered whether the tabulators will eventually have modems to connect to the internet, leaving them vulnerable to hacking. But ES&S spokesperson Katina Granger said the use of cellular modems for transmission of vote totals in Kansas is not certified, “therefore ES&S cannot and will not ship DS200s with modems installed. They are physically absent.”

Ultimately, the new tabulators will be an improvement for voters and poll workers, Fast said. “I’m really excited about it.”

Neither Fast nor Hanzlick was on the commission when the equipment was bought two years ago. Commissioner Jim Allen was, and he too, believes the new tabulators will be for the best.

“Long term, the telling point is the other large counties in Kansas were using the tabulators and most major counties in the country are using the same thing. It seems to be a pretty prudent system elsewhere in the state and in the country,” he said. “For a lot of reasons I think it’s the right thing to do. Looking back, should something been done differently? I don’t usually go there. I try to do what I think’s best when it’s presented to us.”

The commission at the time was primarily interested in getting the best technology that would leave a paper trail to audit the votes, he said. The 15-year-old touch screens the county had been using did not record votes on paper, and voters could not check whether their ballots had been properly recorded.

“Based on that information at the time I think we did the best that we could. We were cautious when we bought those,” Allen said.

Commissioner Michael Ashcraft also voted for the built-in tabulators in 2018. He voted for the new tabulators Thursday, but with a note of caution. “It raises legitimate questions when we spent $10 million a couple of years ago and now we’re adding another million dollars,” he said during the meeting. “If this trend continues in ten years there will be several more million potentially added to this. I want to make sure we’re not only ensuring safe elections but doing it as efficiently as possible.”