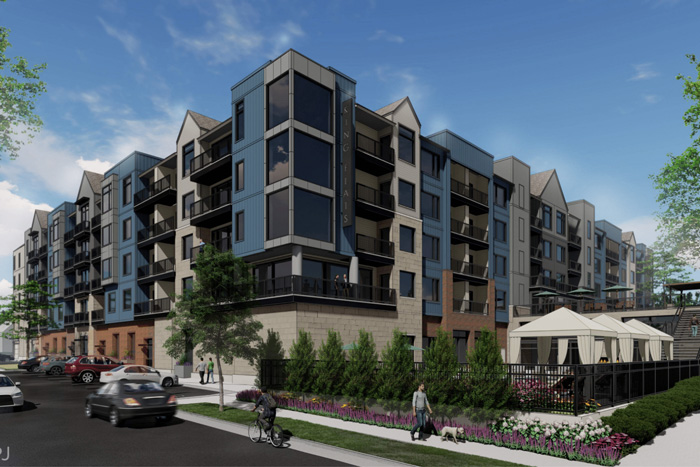 A rendering of preliminary plans for a residential complex on the site of the former Wonderscope Children's Museum. Sunflower Development Group shared tentative plans with neighboring residents last week on their proposal for the site. Image credit NSPJ Architects.

A new residential development is on the horizon for the site of the former Wonderscope Children’s Museum near downtown Shawnee.

Sunflower Development Group, based in Kansas City, Missouri, tentatively plans to build a 5-story apartment complex with 185 to 190 market-rate units at 5700 King St.

Jason Swords, a partner with Sunflower Development Group, said all plans are preliminary and subject to change. At this point, Sunflower plans to invest $45 million in the project.

“Our development plan is not 100% completed yet,” Swords said, noting that they could present a formalized plan to the Shawnee planning commission in the next two months.

A flurry of private development is already underway downtown, including Sixty16 Apartments, a residential complex under construction near Old Shawnee Pizza. Swords said the downtown area is a good opportunity for development, especially considering its proximity to downtown Kansas City, the Country Club Plaza and the rest of Johnson County.

“We feel like it’s an up-and-coming neighborhood, and this type of development would impact the businesses and the livelihood of downtown Shawnee in a positive way,” he said. “Our type of tenants will spend money in downtown. It’s going to be a positive stroke for the strategic plan of downtown Shawnee.”

Mark Moberly, director of development for Sunflower Development Group, said they showed interest in this area because they consider downtown Shawnee to be urban development.

“As we spend time down there to see all the infrastructure improvements that have been made, we read about the various retail and commercial businesses that are opening up in downtown Shawnee, a big piece of that is residential,” Moberly said. “To have the folks that are going to be able to patronize those retail shops and community events, we feel like there’s a little bit of a gap in Shawnee right now, and this city has certainly supported residential development.”

The building was originally Flint Elementary before it closed and was converted into the children’s museum. The developer is in a non-disclosure agreement for the property and therefore did not disclose any details about the sale. Property records indicate the Regnier Family Foundation is the owner.

The developer shared preliminary plans with neighboring residents via Zoom video chat on May 11 to let them know about it and solicit feedback from them.

Several residents shared their concerns that the site brings too much density to their neighborhood at 57th and King. They’re also concerned the project will create parking issues and traffic congestion and take away green space.

“They have been very open, so far, and honest with us about what their plans are, which I appreciate,” said Carrie Griffin, a neighboring resident and daycare owner. “Our issue is the scale of the project is massive.”

Moberly said there will be many future opportunities for neighbors to engage on the project.