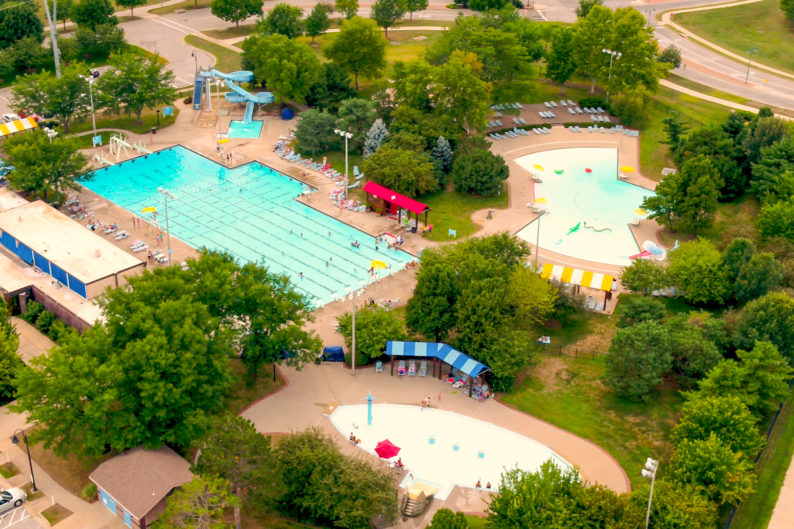 Leawood plans to open the pool June 8, but that date could be pushed back to June 15, depending on lifeguard training. Pictured above is the Leawood Aquatic Center, located at 10601 Lee Blvd. Photo via City of Leawood.

The target date for opening the center, at 10601 Lee Blvd., is June 8, but that could be pushed back to June 15 based on necessary time to train lifeguards, Parks and Recreation Director Chris Claxton told the council. Councilmembers and staff discussed several logistics details without making final plans — including how many people at a time to allow in the pools, restrictions on people entering and leaving the facility, social distancing enforcement, the use of masks by lifeguards, schedules for swimming lessons and other training.

City Administrator Scott Lambers asked the council to allow only Leawood residents with reservations to use the center, saying that would be easier to administer. If a non-resident has a complaint, “they need to go to their city council.”

“I think there’s no way that we’re going to be able to accommodate the demand our residents are going to place on us,” Lambers said. “We’ll do the best we can but even then, we’re going to be overwhelmed. We’ll have to have shifts, time to clean and then open. And we’ve got to make sure we can get lifeguards. … I think there may be a perception out there that we’re taking care of our own. In this case, we are.”

“I would hate to say that we’re open — and it would be a PR nightmare — we’re open, Leawood residents only, and look at that, they’re only at 25% capacity and all these people wish they could come,” Harrison said.

The daily fee for using the center also brought some disagreement. Claxton favored reducing the daily fee from $6 to $3 for a one and a half hour to two hour session. Ward 4 Councilmember Lisa Cain and Mayor Peggy Dunn agreed. But Ward 1 Councilmember Andrew Osman opposed cutting the fee because the city faces lower revenue from social distancing requirements and the need for extra training.

Ward 3 Councilmember Chuck Sipple asked Claxton how much of a deficit the center would operate at this year. Claxton said that she didn’t have exact numbers but that the pool would operate at a deficit. Dunn said the pool had always been subsidized to a certain extent beyond user fees.

The center might not issue pool passes this year because of time restrictions on using the facility, Claxton said. She wants Leawood residents’ family members who live in other cities to be allowed to come to the center if they’re bringing residents’ children.

Claxton said she was using the Kansas Recreation & Park Association model for social distancing in pools and tailoring it to Leawood’s facility, which would allow for 350 people in a session. Normally, the center on a good day might have 700 to 1,000 visitors staying for various lengths of time.

“Yes, people are responsible for their own social distancing,” she said, “but we also have a responsibility to make sure that we don’t put the staff under duress, that we try to keep people as safe as we can when they’re in those areas.

The council also discussed whether to have a Fourth of July celebration but tabled it for further discussion at its June 1 meeting. Lambers said the city couldn’t handle crowds at Leawood City Park and adhere to social distancing requirements while taking people to the park on busses. He suggested the possibility of doing a fireworks display at the park but prohibiting the public from watching it in the park.

Ideas were floated for having a fireworks display launched from other places, including City Hall, that would enable people to watch it from other locations. An 800-foot diameter area around the fireworks’ launch site must be kept clear for safety, Lambers said.

Harrison suggested the possibility of mapping out a dozen different locations where fireworks set off at City Park could be seen and where people could park their cars and watch the display, and possibly getting some food trucks to go to some of those locations.

Osman said that Lambers was doing “a magnificent job given the circumstances of the past couple of months” and that Lambers was responsible as city administrator to protect the city from foreseen or unforeseen liabilities.

Ward 4 Councilmember James Azeltine said safety had always been his top priority as a councilmember. The idea behind the lockdown was to flatten the curve of COVID-19 deaths and hospitalizations, and “I think we’ve done that.”

“This is the biggest event that we’ve dealt with as a country in a century,” he said. “The fireworks — I can’t think of a better metaphor for the American spirit. … I respect Scott’s … stance in wanting to protect us all. … This is America and it’s a citizen’s choice to go out and stand in a crowd if they want. My opinion is that as long as the state allows us to have this event, we must. … My gut tells me this may be one of the most important symbolic decisions this governing body ever makes.”