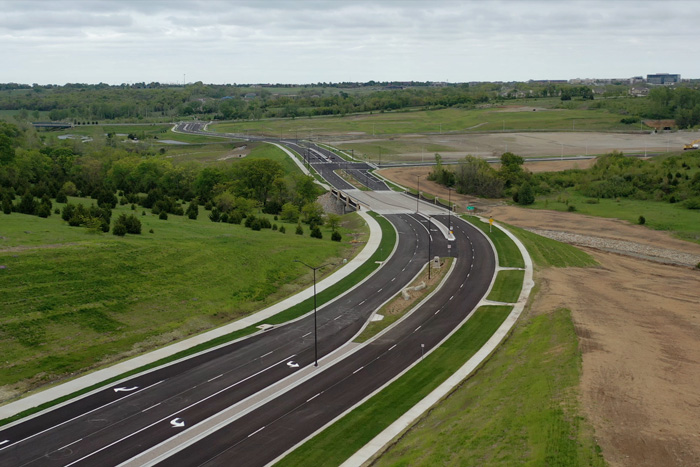 Lenexa opened the new section of Ridgeview Road on Thursday. The project cost an estimated $23.1 million, $6 million less than the city’s budget for it. Photo credit city of Lenexa.

The two-year design-build project included construction of a four-lane arterial roadway with curb and gutter, asphalt surfacing, storm drainage, traffic signal installation, intersection improvements, and the addition of a bridge across a Little Mill Creek tributary.

Ridgeview opened to traffic on Thursday. Construction began in March 2018.

Other portions of the project included construction of the following:

The project cost an estimated $23.1 million, $6 million less than the city’s budget for it. City Manager Beccy Yocham said the design-build method saved the city money, facilitated efficiency and allowed the project team to “bring a lot of creativity to how to accomplish it in the best way possible,” especially on terrain that can be challenging to develop.

The city also repurposed the mine tailings (leftover material from mining operations) from the old limestone quarry in the area, as fill for the project. Ben Clark, project manager, said this saved on construction costs and also remediated a blight.

The project was originally slated for November 2019 completion but the wet spring and summer, coupled with early freezing temperatures in the fall, slowed construction. As with other roadwork projects, completing portions of the project was weather dependent and required warmer temperatures, such as asphalt surfacing and pavement markings.

Yocham said the project is a “big piece” of the city’s transportation plan.

“It opens up a rather large portion of our community for development,” Yocham said. “It’s an area that is really not served by roads today and without this roadway, would remain undevelopable. So we’re really excited to open up this area of our community because we’re really running out of developable land in a lot of portions of the community. This will be a big opportunity.”

Four private developments are underway in the area, including: