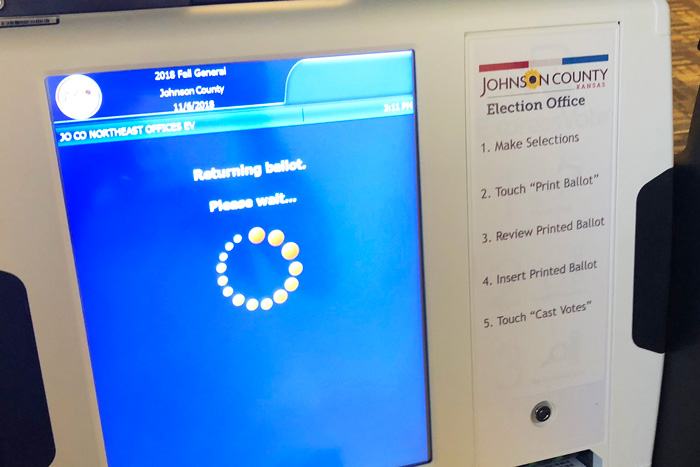 The existing machinery, purchased in 2018 for $10.6 million, will now basically become ballot markers instead. Voters who use them to make their choices will then walk their marked ballots over to a separate tabulator to be counted, said Elections Commissioner Connie Schmidt. The 2018 voting system is pictured above.

But the change also renders redundant the built-in tabulation function that was the star feature of the $10.6 million purchase in 2018. That year the county was first in the country to use the voting machine/tabulation combo that had just been developed by vendor Election Systems and Software, of Omaha.

The existing machines will now basically become ballot markers instead. Voters who use them to make their choices will then walk their marked ballots over to a separate tabulator to be counted, said Connie Schmidt, who is election commissioner through this year’s ballots, after which the Secretary of State’s appointee Fred Sherman will take over.

The plan is to swap out 240 of the voting machines with brand-new DS 200 tabulators, Schmidt said. But because they aren’t equal in price, the county will need to spend another $1,020,500. And it has to be done before the end of May, because that’s when special pricing expires from a previous group deal with Sedgwick, Shawnee and Wyandotte counties. All but about $35,000 may be reimbursed from federal funds.

The county can spare the voting machines because there was often an extra one sent to each polling place, Schmidt said. The distancing rules will also limit the number of machines at polling places, further reducing the need.

The change is necessary due to “a cascade of issues,” said Sherman. Chief among them are the new best practices for distancing and sanitizing voting equipment due to COVID-19. But Schmidt and Sherman say the tabulators will bring other improvements for election workers as well.

Having all the results tabulated by one machine will limit the number of USB drives that have to be kept track of, for one thing. Since the voting machines and tabulators are not connected to publicly-accessible Wi-Fi, results have to be delivered back to the election office on those drives. In recent national elections, 2,100 machines produced 2,100 USB drives. The new tabulators could reduce that down to one or two per polling place.

The machines also will take less time to boot up, Schmidt said. A quick and easy start-up and shut down are especially important this year, she said, because many experienced poll workers have decided to sit 2020 out. The county has been actively seeking younger poll volunteers, including students.

Although voting by mail is encouraged this year, the state still requires in-person polling places to be open. But concerns about spreading the virus will mean major changes for in-person voters and the people running the polls.

For example, Schmidt expects more people than normal may want to mark a paper ballot rather than use the touch screen. Paper ballots have always been available, but they had to be returned to the election office in a sealed envelope to be scanned on equipment that could handle the larger paper. Therefore, those votes were not included in the first tallies reported after the polls closed.

The new tabulators will be able to scan those paper ballots at the polling places, enabling those votes to appear on the early totals, she said.

For touch screen voters, it will become a two-machine process. Since the new machines were put into use in 2018, voters have been able to check a print-out to ensure the accuracy of the vote. That much won’t change.

But now, instead of feeding the slip back into the same machine to be stored and tabulated, voters will have to walk their printed ballots over to put them into a separate tabulator. There will be one tabulator at each polling place, except for the larger locations where 600 or more voters are expected, Schmidt said.

That should eliminate some of the confusion caused by the county’s existing machines, which also have an option for people to simply cast the ballot without looking at it.

“That created an issue because some voters were confused and thought they didn’t get to see their ballots,” Schmidt said.

“From the voters’ perspective it will still function the same. They just won’t feed the ballot back in to be tabulated,” Sherman said.

It’s not bad to be first to try a new system, Schmidt added. But, “In an election you prefer to be in a pool of people nationwide doing the same thing with the same equipment instead of being the one or two percent doing something different with the same piece of equipment,” she said. Vendors are more apt to provide improvements to the bigger majority, she said.

Schmidt wasn’t at the election office two years ago when the new equipment was purchased, “but I was concerned about it because I care about this office,” she said. But she added that the existing equipment is state-of-the-art and widely used.

The tabulators will be another step in the evolution of machine voting in Johnson County.

Before 2018, the county had a 15-year-old system that was set to become obsolete. Then it failed in the high-turnout presidential election of 2016 because of computer storage issues and a high volume of absentee voting. That failure caused the county to be hours late in reporting unofficial vote totals.

Since that election the national conversation about voting has been fraught with accusations of Russian hacking and general mistrust from both parties.

Part of the reason the county replaced its aging electronic machines in 2018 was to ease those anxieties and give voters a way to check whether the machines accurately marked their ballots. The previous machines did not leave a paper trail for audits.

But the debut of the new machines did little to ease voting anxiety. Coding problems caused the system to freeze when it was time to report the totals at the end of the night. Once again, Johnson County did not report unofficial results until the next day.

Schmidt said she does not expect similar problems with the tabulators coming so soon before the August primary. If the commission approves the tabulators, Schmidt expects them to be delivered by the first week of June, if not earlier. She said the equipment is already available and is being prepared.

Moreover, there are only 240 new machines and the platform remains the same. In 2018, there were 1,100 new machines with new code for the primary, followed by 2,000 more for the general election.

The election office is not correcting a bad buy, but improving on what the county already has, Schmidt said. “This whole process has been not anything we really set down to do. It just kind of developed through the problem-solving of COVID-19.”